Former Trump Plaza being imploded: Here’s how to watch it come down on livestream from Atlantic City 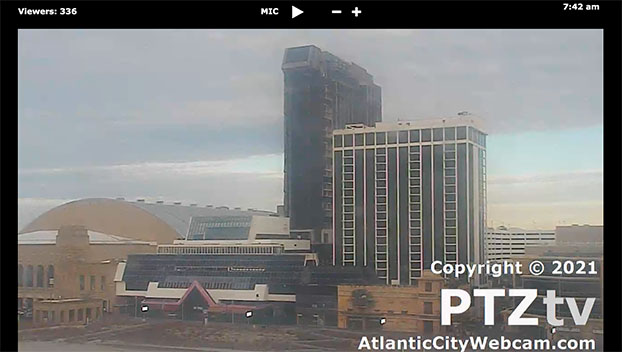 By mid-morning Wednesday, a spot on the Atlantic City Boardwalk where movie stars, athletes and rock stars used to party — and a future president honed his instincts for bravado and hype — will be reduced to a smoking pile of rubble.

The former Trump Plaza in Atlantic City, shuttered in 2014 and vacant since, is set to be demolished around 8 a.m. Central on Wednesday, Feb. 17.

The one-time jewel of former President Donald Trump’s casino empire will be gone, clearing the way for a prime development opportunity on the middle of the Boardwalk, where the Plaza used to market itself as “Atlantic City’s centerpiece.”

“The way we put Trump Plaza and the city of Atlantic City on the map for the whole world was really incredible,” said Bernie Dillon, the events manager for the casino from 1984 to 1991. “Everyone from Hulk Hogan to Mick Jagger and Keith Richards, it was the whole gamut of personalities. One night before a Tyson fight I stopped dead in my tracks and looked about four rows in as the place was filling up, and there were two guys leaning in close and having a private conversation: Jack Nicholson and Warren Beatty.”

“It was like that a lot: You had Madonna and Sean Penn walking in, Barbra Streisand and Don Johnson, Muhammad Ali would be there, Oprah sitting with Donald ringside,” he recalled. “It was a special time. I’m sorry to see it go.”

But go, it will, at 8 a.m. Wednesday. Demolition crews have positioned explosives at strategic points along the building’s support structures designed to knock its legs out from under it, bringing the building down on itself, with the debris falling in a slightly north-northeast direction, Fire Chief Scott Evans said.

“It will crumble like a deck of cards,” he said.