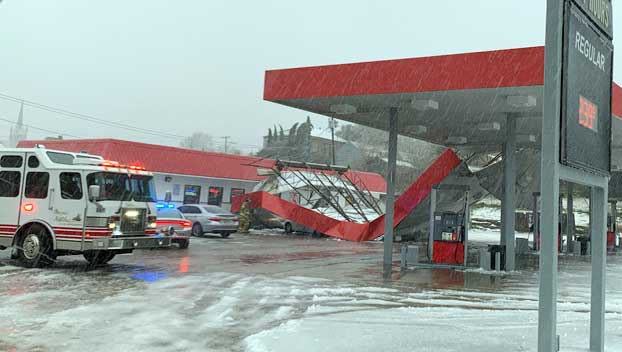 The second round of winter storms that crossed Mississippi this week plunged more than 111,000 customers in the dark Wednesday as snow, sleet, freezing rain and ice wreaked havoc on the state’s infrastructure.

The website Poweroutage.us reported more than 111,000 customers in Mississippi were without power Wednesday night after the winter storm knocked down powerlines in a swath from southwest Mississippi up through the central part of the state.

Wednesday’s weather was the second in a one-two punch of abnormally cold and wet winter storms that hit the Magnolia State.

The Natchez Democrat reported that roofs and overhead awnings all over Adams County had begun to collapse under the weight of the ice and snow.

Many roads in central parts of Mississippi were already covered in ice and snow after the winter storm that dumped snow and ice on Sunday and Monday.

The roads in Adams County were so treacherous that the county issued a mandatory 24-hour curfew prohibiting anyone from driving on the roadways unless an emergency or for frontline emergency first responders and hospital staff.