A Tennessee couple is counting their blessings after their teenage son took his first steps toward recovery after being impaled by a metal tractor spear in a freak sledding accident.

“He walked the hallway length and back,” Todd and Christie Reid in a Facebook post Thursday alongside video from inside a Tennessee hospital. “He was determined to tag the door at each end. God is so good!”

The Reids, from Arlington say it’s a miracle their son, Sam, is still alive. The Daily Memphian reports that the couple learned their son had been thrown from a sled and pierced by a large metal spike used to lift hay bales while the couple was on vacation in Natchez.

The accident happened Feb. 13, when Sam was on a sled being pulled by a four-wheeler. At some point, the rope hitched to the four-wheeler broke, flinging the teen toward a nearby tractor.

When Sm slid into the hay fork attached to the tractor, a metal stake entered his lower abdomen, up through his chest and exited behind his neck and shoulder.

“An inch either way” could have killed their son, the Reids told the newspaper.

“God saved Sam that day,” the couple wrote. “He has a long road to recovery. Prayers for comfort and endurance.” 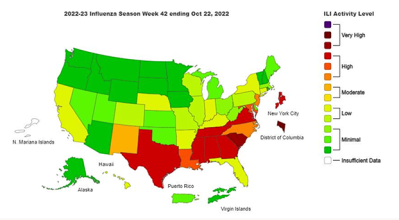