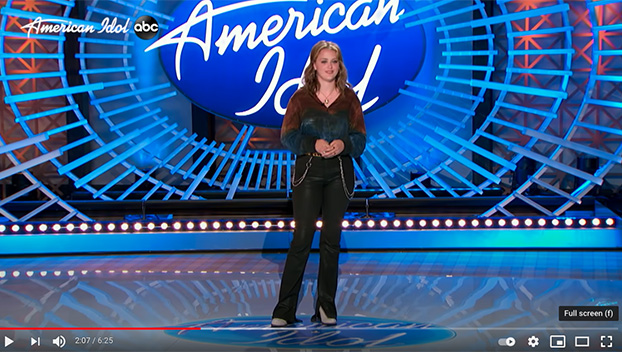 Katy Perry thought she might be looking into a mirror when Canton’s Hannah Everhart walked in for her audition to be the next American Idol.

The 17-year-old Canton native resembles the Idol judge and pop singer and she knows it.

“I get that a lot,” Everhart told Perry and the other judges Luke Bryan and Lionel Richie.

One thing she might not know — but Katy Perry does — is that she may not be just the next Idol champion. She might be able to even outdo Perry one day.

“Out sing me Hannah. You know you can,” Perry said as Everhart started singing Etta James’ classic hit “At Last!”

It wasn’t the first song the Canton singer chose to audition with.

The judges stopped Everhart from singing in the middle of the song. With the exception of Perry perhaps, Bryan and Richie did not seem impressed with Everhart’s attempt.

It wasn’t until Everhart revealed that she was going to originally audition with “At Last!” but she decided not to as she wanted to “play it safe.”

“Why you going to play American Idol safe?” Bryan asked.

Perry wanted to hear Everhart’s version of the song.

During her brief performance of the Etta James hit, Perry joined in to sing. Perry encouraged Everhart to give all she had to the song and to the judges.

Perry saw something in the singer and told her so after her audition.

“You have an attitude problem,” Perry said. “And I like it, but you are no longer allowed to play it safe, you better start rolling the dice on your life.”

“You’re sitting on a goldmine,” Lionel Richie said with a smile.

Everhart impressed the judges so much that she earned a golden ticket to Hollywood.

‘Crop circles’ frozen into surface of Alabama creek have…