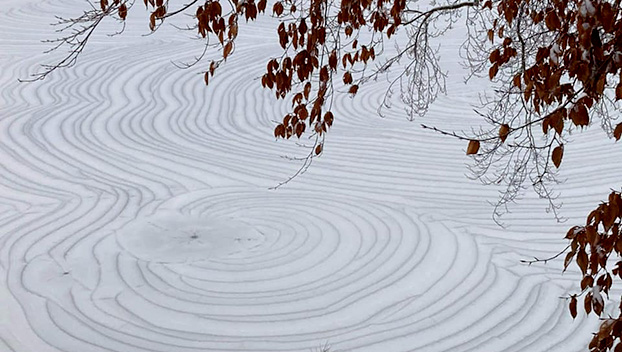 Was it aliens or some rare feat of mother nature?

Mysterious swirls found on a frozen Alabama creek have meteorologists across the country debate how the hypnotic swirls came to be.

Images of the ice formations have been posted multiple times on social media since they were discovered on Feb. 18 on top of Anderson Creek, near the Tennessee River in north Alabama.

But how they came to be, no one can agree.

Many people likened the swirls to some type of frozen crop circle that you might see from an airplane.

Some suggested the circles were man-made while others joked that aliens might have been involved.

Residents who have lived along the creek 15 years say this is the first time they’ve seen such formations.

“This pattern occurs when moving water forces the forming ice to slowly rotate,” Spann wrote. “Shear is involved … When on one side of the creek you have water that’s moving faster than on the other side causing the ice to form in swirls.”

Not everyone was convinced, however.