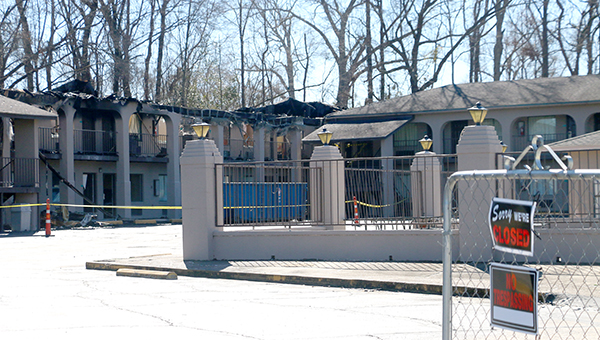 State fire investigators say the actions of a guest caused a raging fire in a Mississippi hotel that forced the evacuation of its customers into sub-freezing temperatures earlier this month.

With temperatures already well-below freezing, and the first wave of the severe winter storms that struck Vicksburg and Warren County in mid-February, the Vicksburg Fire Department was faced with a massive fire under challenging conditions.

Late on Feb. 14, the department was called out to a structure fire at Oyo Hotel on South Frontage Road. When they arrived, they found part of the building already fully-involved to the point where a second alarm and more units were needed.

Vicksburg Fire Chief Craig Danczyk, who was the second unit on the scene, remembered temperatures were already in the teens and that the fire — which had ignited in the middle section of the C-shaped facility — was looking to spread further.

“We did have some slip and fall injures among our firefighters. I can attest to that myself. I slipped and fell myself,” Dancyzk said of icy conditions that resulted from water being sprayed on the fire that was already beginning to freeze on surfaces and in the parking lot. “We were still several hours from the initial brunt of the storm and it was very cold.”

It was those freezing temperatures and more severe winter weather expected, that indirectly led to the fire in the first place.

Danczyk said an investigation, led by the State Fire Marshal’s office and supported by local investigators, blamed the fire on a space heater in one of the rooms that caused an ignition.

“It has been determined that a space heater, brought into a room by an occupant, was the cause,” Danczyk said. “It caused an ignition, which caught the room on fire and then caught the building on fire.”

Danczyk said the fire, which caused significant damage to the first and second floors of the building, did start to spread through the attic but was cut off by tactics used by firefighters. He said that Ladder 3 was positioned on one side of the fire and Platform 1 was placed on the other, with both delivering water through their aerial apparatus. In the middle, multiple units were delivering water room-to-room.

“Those tactics worked well,” Danczyk said in slowing the spread of the fire to other areas and buildings. “People who were staying the night were able to evacuate. It turned out as good as it reasonably could. Even the property owner was appreciative of the efforts.”

Danczyk said State Fire Investigator Kayla Riggs led the investigation, with the support of Vicksburg Fire Captains William Wienke and Daryl Carson. Wienke was the first officer on the scene and was able to provide details of the early part of the blaze. Carson and Riggs, Dancyzk said, were unbiased in the investigation, and with the insight from Wienke and the evidence collected, led all three to agree on the cause of the fire.