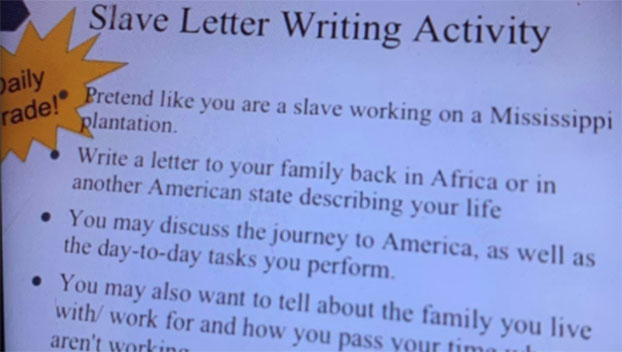 Eighth graders at a Purvis Middle School were recently asked to “pretend like you are a slave working on a Mississippi plantation” and “write a letter to your family back in Africa… describing your life.”

The school assignment was first reported on the website The Daily Beast.

A screenshot showing the assignment titled “Slave Letter Writing Activity” has been shared hundreds of times, garnering reactions ranging from concern to anger.

This is at purvis middle school. Someone needs to explain 😡 #Blacklivesmattermississippi pic.twitter.com/PZeGOB55ZR

Frank Bunnell, the principal of Purvis Middle School, also confirmed the assignment to parents in an email.

Hampton told WDAM in Hattiesburg that the assignment was the last slide in a 12-slide PowerPoint presentation about the “atrocities and negatives of slavery.”

Hampton said the purpose of the assignment “was to show our students just how horrible slavery was and to gain empathy for what it was like to be a slave.”

The Daily Beast reported that some activists in Mississippi were outraged by the assignment.

Jeremy Marquell Bridges, social media manager for Black Lives Matter Mississippi, said he doesn’t understand how the exercise was helpful in any way. He viewed it as hurtful, instead of being helpful.

Jarrius Adams, the president of Young Democrats Mississippi, called the exercise ‘tone deaf’ and ‘inappropriate no matter the intention.

Reginald Virgil, the president of Black Lives Matter Mississippi, said the exercise and the way it was written was just another attempt to ‘whitewash’ history.

At Purvis Middle School, white students make up more than 80 percent of the student body.