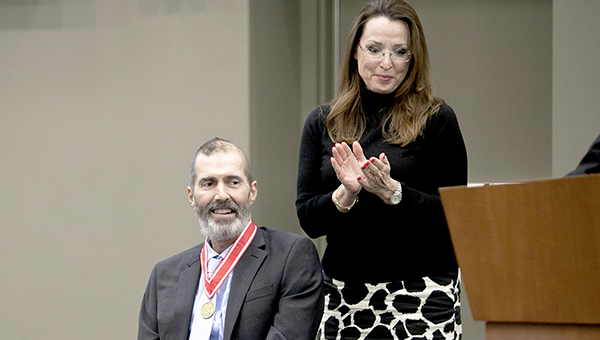 Alex Baylot, a civil engineer at the U.S. Army Engineer Research and Development Center, smiles after being awarded the Bronze Order of the de Fleury Medal — one of the highest honors bestowed to employees of the U.S. Army. Also pictured is Baylot’s wife, Paula. (Photo courtesy of ERDC)

Alex Baylot began his career at the U.S. Army Engineer Research and Development Center more than 30 years ago, and in January 2020, his decades of hard work and service to the Army were recognized with one of the highest honors bestowed to employees — the Bronze Order of the de Fleury Medal.

Baylot, a research civil engineer, was known for his expertise in mobility. He spent 22 years in the Geotechnical and Structures Laboratory, where his skills were used in combat simulations to assess the effectiveness of tanks and other ground vehicles on the battlefield.

Sadly, Baylot, a Warren County native and a graduate of Warren Central High School, died Thursday after a three-year battle with Glioblastoma brain cancer. He was 58.

During the ceremony presenting Baylot with the award, his wife, Paula, spoke for him, as the fight against the deadly cancer had removed his mobility and his ability to speak.

“It’s amazing how fulfilled Alex has always felt in his job,” Paula said. “He felt he was really making a difference, and he felt challenged.”

The de Fleury Medal is awarded by the U.S. Army Engineer Association to those who have made significant contributions to Army Engineering, and is inscribed with the words “a memorial and a reward for courage and boldness.”

Baylot was instrumental in the development of deployable force protection, which tested tools and technology before it landed in the hands of soldiers.

“That work is continuing on today,” said Dr. Simon Goerger, who has worked with Baylot for years. “It literally saves lives, and it’s saved millions of dollars.”

In a post on caringbridge.org Paula described Alex’s diagnosis, his rounds of treatment and complications as the cancer had grown larger, stronger.

“In October of 2018, Alex went to the doctor because of ongoing headaches. We thought it wasn’t important until he threw up,” Paula writes. “He was sent for an MRI, only to discover he had glioblastoma brain cancer. The deadliest form of brain cancer there is.”

Almost immediately, Baylot was in Houston for a surgery that removed 90 percent of the tumor, however, “the portion not removed was located in the ganglia portion of his brain which is responsible for all communication. Two days later, he could no longer talk or use the right side of his body.”

In his obituary, Baylot was described as a “quiet and kind gentleman, holding to the highest integrity in his professional and family life.”

After attending Warren Central, he attended and graduated from Mississippi State University with a degree in industrial engineering and later a master’s degree in civil engineering. At the time he was diagnosed with cancer, he was attending the University of South Alabama studying for a doctorate in systems engineering.

Baylot was also a deacon at Highland Baptist Church.

Family and friends may pay their respects at Highland Baptist Church on Halls Ferry Road on Tuesday. The family will be available from 1 to 3 p.m., and a memorial service will commence at 3 p.m.

In 2015, Baylot shifted to the Information Technology Laboratory, where he became a major player in one of ERDC’s five major research areas — Engineered Resilient Systems. He was also instrumental in establishing the Institute for Systems Engineering Research, a joint effort between ERDC and Mississippi State University to improve Department of Defense acquisition programs.

“When they were summing up his career and all the things he did, I was so impressed; I knew that so often, he was one of the smartest people in the room,” Paula said on behalf of her husband as he accepted The de Fleury Medal. “I was so proud for him, and he has loved his job so much.”