Weather officials: Tornadoes a “big risk” for parts of Mississippi 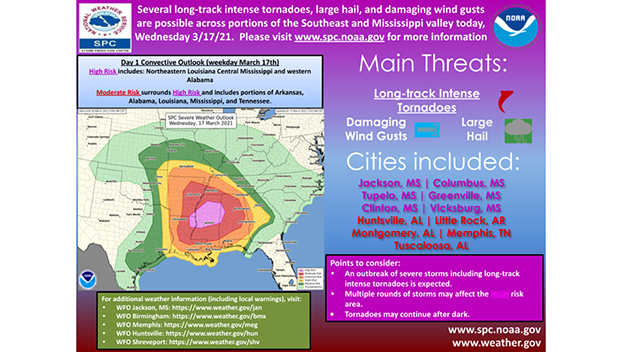 Some schools in the South are closing Wednesday as residents in several states brace for the possibility of intense tornadoes that travel for miles and hail the size of tennis balls.
The Wednesday storms could produce intense tornadoes, The Storm Prediction Center said in a briefing.

At highest risk is a region that includes parts of Arkansas, Louisiana, Mississippi, Alabama and Tennessee. The area in the bullseye for possible tornadoes is home to more than 8 million people and includes Memphis, Tennessee; Birmingham, Alabama; Little Rock, Arkansas; and Jackson, Mississippi.

Officials in Vicksburg were already preparing Tuesday afternoon for the line of storms that are expected to move through the area.

“The main risk will be tomorrow afternoon, so for (Vicksburg) it could be as early as 3 o’clock going to 6 or 7,” said Joanne Culin, a meteorologist with National Weather Service Office in Jackson. The storms, she said, are expected to be quick-moving.

“We are looking at a pretty significant severe weather risk,” she said. “Tornadoes likely, some strong and long track, damaging winds and large hail, some of it probably baseball size.” Tornadoes, she said, “are a big risk.”

In parts of Louisiana, Mississippi and Alabama, any storm cell that develops Wednesday afternoon “could quickly become a supercell capable of producing strong tornadoes,” the Storm Prediction Center warned.

Some areas can expect 60-70 mph wins with the storms, Culin said, adding things will be windy Wednesday with wind speeds of about 45 mph before any storms develop.

He cautioned, however, the storms may not hit exactly as predicted.

“It’s not an exact science; it could go either way,” he said. “The bottom line of the story is we are probably going to see a significant weather event tomorrow beginning sometime tomorrow afternoon or late morning going through tomorrow evening and now it the time for people to get ready.”