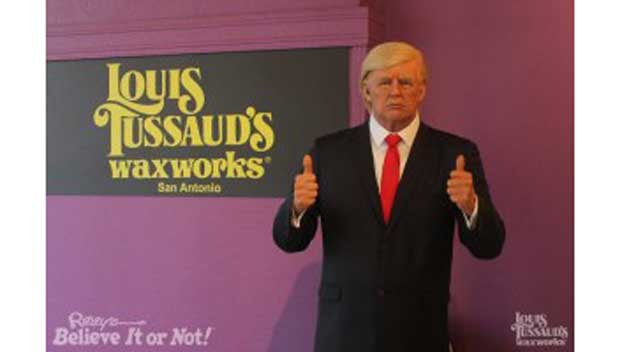 Visitors to a Texas museum can no longer take their frustrations out on Donald Trump. Like the late Elvis Presley, Trump has left the building — or at least he’s no longer on public display.

Officials with the Louis Tussaud’s Waxworks museum in San Antonio, Texas, confirmed the removal of the lifelike wax Trump this week after museum visitors kept abusing the figure, the San Antonio Express-News reported.

“Our wax figures will need repairing from time to time, ranging from Hollywood celebrities to political figures,” spokesman Suzanna Smagala-Potts with the was museum’s owner Ripley Entertainment told USA TODAY in a statement. “When a wax figure has been damaged, we will remove the figure from public display and send it to our talented team of artists for repair.”

Trump’s replica is in storage, museum officials said. It was unclear when it might return to public display.

While Trump’s wax replica may have taken more than its fair share of abuse, his figure isn’t the only one to feel the public’s wrath.

The San Antonio newspaper reported that other presidential wax replicas have also taken a beating, including the likenesses of former President George W. Bush and Barak Obama.