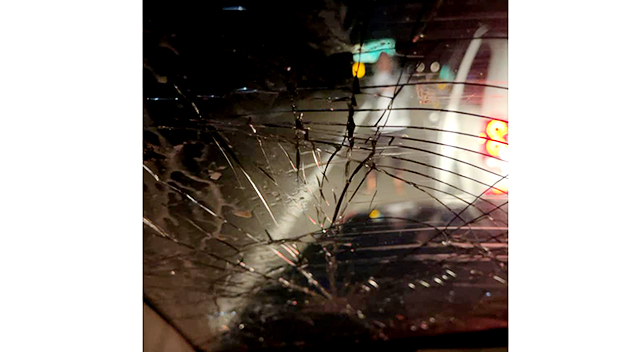 A woman said she is happy she didn’t wreck when her car was hit by an object thrown of a Mississippi interstate bridge.

Candice Myatt posted her harrowing experience with a picture of her car’s broken windshield on Facebook Sunday.

Her car was among several that were hit by objects thrown from a bridge on Interstate 59 near early Sunday morning.

Myatt and her 12-year-old daughter were driving to Meridian from Biloxi on Interstate 59 when their car was hit.

Myatt told WTOK News in Meridian that she thought her car had been hit by gunfire and the sound of the object hitting the car worked her sleeping daughter.

Myatt said seven other cars were pulled over on the interstate after being hit by the fallen objects.

A deputy with the Lauderdale County Sheriff’s Office said five young people were reportedly standing on the bridge throwing objects at cars on the interstate. The deputy did not identify what type of object was thrown from the bridge

No injuries were reported from the incident.

Officials say the suspects have been identified and that the next course of action for the individuals is being determined to make sure the individuals are being held accountable. So far, no arrests have been made. The case continues to be under investigation.