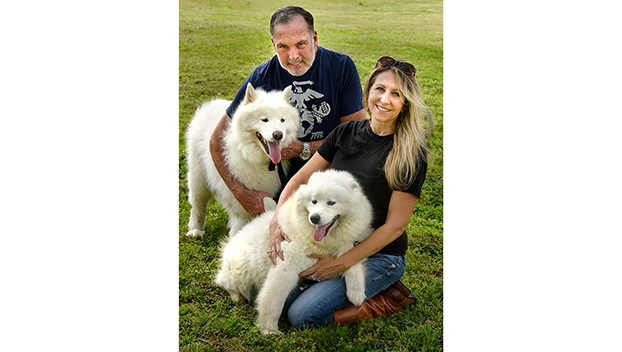 There is lots of love and fur in the Dutton family after they rescued their second Samoyed pup from the meat trade in China. Eddie Dutton wraps his arms around Ice while Alicia Dutton holds his new sister Vixen. (Photo by Ben Hillyer / The Natchez Democrat)

The newest member of the Dutton family is short, sweet, super loving and playful despite having had a rough time getting to her “furever” home.

Alicia and Eddie Dutton, who moved to Natchez, Mississippi, from Atlanta in February 2020, recently adopted a female Samoyed that had been rescued from meat trading in China.

The organization they used to adopt Vixen, called “No Dogs Left Behind,” is a non-profit organization based in New York that rescues dogs from slaughterhouses and the dog meat market.

Every year, millions of dogs are killed for consumption. The Lychee and Dog Meat Festival in Yulin, Guangxi, China, is a summer festival dedicated to the eating of dog meat.

According to No Dogs Left Behind, an estimated 10,000 to 15,000 dogs are stuffed into small cages, tortured and slaughtered each year during the festival.

It has been reported that many of these dogs were stolen from their owners or smuggled into China from surrounding countries.

The Duttons went to meet Vixen at the airport in New York and bring her home just before the winter storm in February, said Alicia Dutton.

Now as they walk their two dogs around downtown Natchez, it looks as though they are being towed by two fluffy white balls of fur.

Vixen is approximately four years old and noticeably smaller than her brother Ice, who is nine years old and is also a purebred Samoyed.

Dutton said the size difference is likely because dog traders could be fined if the dogs exceeded a certain size limit. Dutton said the dogs in the meat trade were tortured to induce the fight or flight response before being slaughtered so that a desired chemical would be secreted into the meat.

“They believe the adrenochrome that is secreted into the meat makes them look younger,” she said. “It’s not like they eat them because they’re starving. This is a delicacy to them.”

Dutton said she has been a lover of the Samoyed breed since she accidentally adopted her first Samoyed while she was still in college.

“In one kennel, there was a solid white German Shepherd and in the other kennel was this white mutt-looking dog with matted fur,” Dutton said. “I didn’t think I had enough money as a college student to feed the big German Shepherd so I picked the other one. As I bathed her, she fluffed out into this beautiful full-blooded Samoyed. She was gorgeous.”

Dutton said she and her husband wanted to rescue another Samoyed and knew a friend who adopted a dog from No Dogs Left Behind. The organization makes sure the animals are adjusted and ready for homes before they allow them to be adopted, she said.

Vixen is as friendly as any dog but needed a little extra work to be house trained after spending a lot of her life trapped in a tiny cage, Dutton said.

Vixen and Ice also get along well with each other, she said.

“She’s fantastic,” Dutton said of Vixen. “She is absolutely appreciative and wants to be petted and loved all the time.”