Mississippi man’s heart stopped twice. He hopes his story of survival will help countless others. 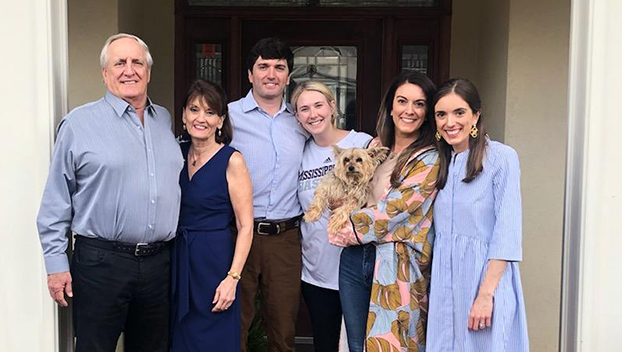 The Taylor family celebrates after videoing a segment for the American Heart Association's 2021 Heart Ball fundraiser, which will be streamed on April 8. From left, heart disease survivor John Taylor with his wife Kay Biglane Taylor, Hunter Taylor with his wife Sarah, Presley Taylor Jennings holding her dog Layla, and Pepper Taylor Self. Not pictured is Presley's husband, John Jennings and Pepper's husband, Wesley Self. (submitted photo)

After 11 p.m. on a Saturday in April 2019, Kay Biglane Taylor of Natchez said she watched her husband John Taylor’s head fall back after his open heart bypass surgery at Baptist Medical Center and yelled for the nurse.

He had just coded.

“Every bell and whistle that could go off in the hospital did,” she said.

She was taken to the hospital’s chapel to wait while the medical staff worked to restart John’s heart.

Kay said she could not cry at first because she was too busy thinking about what she would say to their three children, Hunter, Presley and Pepper.

“That was the start of 78 days in the hospital,” she said.

John coded twice in the first three weeks after surgery and twice doctors came to tell Kay that they did not think he would make it.

Medically, John said he should not be alive. Now, at 67 years old, he is still alive to tell his story and raise awareness for heart disease.

John is the 2021 “Open Your Heart” honoree at the annual Heart Ball fundraiser for the American Heart Association.

The ball traditionally takes place in Jackson but will be held virtually from 7 to 8 p.m. on April 8 due to COVID-19.

Lauren VonForegger, communications director for the Metro Jackson AHA, said this year’s event is also unique because this year a heart hero who is not from Jackson is being recognized, which is rare.

“We almost always have someone from the metro area,” she said.

The digital event will feature a silent and live auction, John’s inspiring survivor story, and entertainment featuring the winner of NBC’s The Voice and Meridian native, Todd Tilghman.

“We are gathering digitally this year to ensure the safety and comfort of our attendees and staff,” said Jennifer Hopping, executive director for the Metro Jackson AHA. “We are looking forward to a fun night We’ll be sharing the important work we’re doing in the community and rallying together for a common cause: creating a world of longer, healthier lives, starting right here in Mississippi.”

The Metro Jackson Heart Ball is the largest source of revenue for the American Heart Association in the state, contributing nearly $7 million since its inception more than 40 years ago.

John said after he died twice and lived to tell about it, he owed it to the doctors, healthcare workers and to the many people who prayed for him during his illness to share his story.

John said he went to see Dr. Kenneth Stubbs in Natchez for a “belching problem” after a trip to New Orleans in March of 2019. Stubbs ordered a stress test, which was irregular, and John went to the University of Mississippi Medical Center thinking he would have a stint put in. As it turned out, his heart was too bad off to get a stint and he would need open-heart surgery.

“The last thing I remember I was laying on the table and a guy telling me how good my veins looked,” John said. “Then I woke up some 30 days later. I have 12 scars on my chest and I can’t tell you where they all came from.”

Kay said while John could only recall bits and pieces of what happened during his month-long stay in the SICU, she remembers a time when his surgeon came out and told her, “I don’t think there is anything else we can do.”

John said the rest of his journey that he could remember was a hard one.

His kidney’s stopped working and he was put on dialysis and was put through physical therapy to learn how to walk again.

John said the most difficult part for him was learning what his family went through.

Speaking at the annual Heart Ball is one way for John to thank the people who prayed and contributed to the science and training that helped save his life, he said.

“The reason I’m here is because of the good Lord, my family, the doctors and all of the people praying for me. … I felt like I needed to thank them,” he said.

Registration for the event is free and can be found at event.gives/jxnheartball. For more information about the 2020 Metro Jackson American Heart Association’s Heart Ball, or to find out more about how you can help prevent heart disease and stroke, call 601-321-1200 or visit metrojacksonheartball.heart.org. 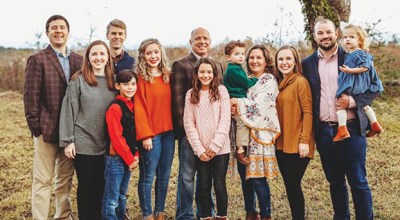