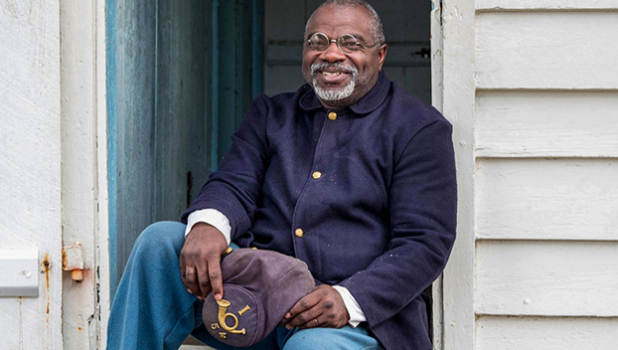 Joseph McGill, has stayed more than 250 nights in what may at first appear to be some of the most neglected places on earth.

For McGill, the founder of the nationally recognized “Slave Dwelling Project,” these places are sacred.

McGill’s lodgings — in approximately 100 different sites in 19 states and the District of Columbia  — have included outbuildings, attics, cabins and other places where enslaved families ate, slept and lived their everyday lives.

On April 17, McGill will add one more place to his list — this time from southwest Mississippi — in a virtual event open to all.

By staying in these neglected structures, the project founder and a history consultant for Magnolia Plantation in Charleston, South Carolina,  not only raises awareness to slavery and starts modern-day conversations about it, but also encourages the preservation of the living quarters for those who made the larger and more eye-pleasing plantation houses what they are.

In an article about McGill’s upcoming Natchez visit in Country Roads Magazine, McGill says he aims to bring stories about slavery to life — stories that have often been left as only a footnote in history lessons.

“We know well about the nice, beautiful big house,” McGill told Country Roads Magazine. “What’s missing from that story are the lives of the people who enabled all that.”

On April 17, McGill is stopping for an overnight stay at Melrose thanks to a collaborative effort between the Historic Natchez Foundation, Natchez National Historical Park and a grant from the Mississippi Humanities Council, said HNF Executive Director Carter Burns.

“In normal times, McGill is able to have people come and spend the night with him at the slave dwellings and share their experience and then there is a campfire discussion about slavery,” Burns said. “With the pandemic, we’re not able to have people join him in person so he will come to Natchez and will go to the slave cabin at Melrose and will do a live broadcast.”

Burns said McGill’s first Natchez broadcast will be at 11 a.m. at Forks of the Road during which viewers will hear an overview of the site and the plan for when it becomes part of the National Park Service.

Another live broadcast will be 6 p.m. from Melrose. McGill will give a tour of the grounds before a Zoom discussion at 7 p.m., which will enable viewers to ask questions and talk about the uncomfortable topic of slavery.

The broadcasts will be streamed on “The Slave Dwelling Project” Facebook page and viewers can register to participate in the Zoom discussion at slavedwellingproject.org.

The event is free and open to anyone, Burns said.

“We would encourage anyone to participate who is interested in history,” he said. “They will learn more about the experience of the enslaved people, what their lives were like, what they went through and the types of buildings they lived in.”

Burns also said he hopes to bring McGill back to Natchez for an annual event.