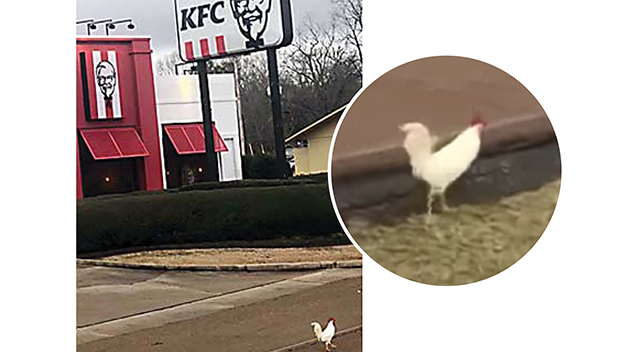 Talk about jumping out of the frying pan into the deep fat fryer.

A rooster in Mississippi thought he was making his escape when the bird became a stowaway on a local truck. Little did the rooster know when he later jumped off the bed of the truck that a fried chicken restaurant was only a few hops away.

When the call came to Natchez, Mississippi, Animal Control Officer Randy Myers, his radio response to the dispatchers caused at least a few folks to chuckle.

“Dispatch, I’ll be out at Kentucky Fried Chicken in pursuit of a rooster,” an online commenter wrote having reportedly heard the comment from her office at the Adams County Sheriff’s Office.

The truth, Myers said, is that the rooster reportedly jumped into the back of a local person’s truck as a stowaway a few months ago, then escaped.

Mr. Rooster has been on the run ever since.

Myers said he just got the call about the escaped bird earlier this week.

He spotted it long enough to snap a photo of the rooster runaway as it ran in front of (of all places), KFC in Natchez, the location where probably hundreds of thousands (if not millions) of his feathered friends have been consumed through the years.

As of Monday morning, Mr. Rooster remained on the lam.

Mayers posted an image of the bird strutting past KFC to a social media group that’s mostly used to help track stray dogs and cats. The juxtaposition was too much to pass up and the comments ensued.

“Tho I walk through the valley of death …” wrote one person, hinting at the bird’s bravery.

Another commenter suggested just the opposite.

“I’m thinking the chicken should not have crossed THAT road,” he wrote.