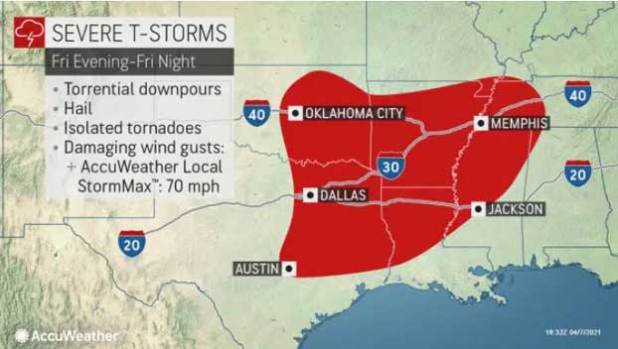 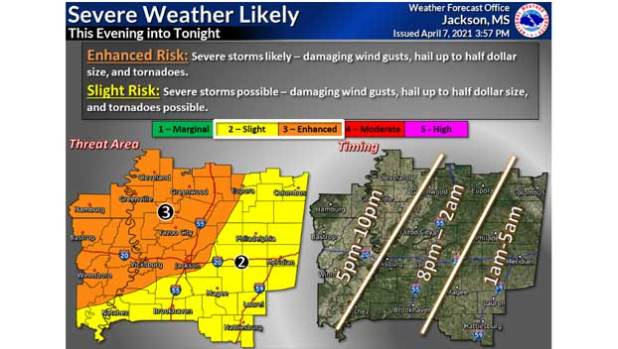 Following an extensive severe thunderstorms danger over the Plains and Mississippi Valley that will last through Wednesday night, AccuWeather meteorologists expect the atmosphere to reload over the southern United States with the risk of another outbreak of damaging and dangerous storms to develop late in the week.

Remnants of storms from Wednesday night are expected to push through the Interstate 10 and 20 corridors of Louisiana, Mississippi, Alabama and the Florida Panhandle during the day on Thursday. Some communities can be hit with torrential downpours and gusty winds.

The late-week severe thunderstorm threat is likely to be entangled with torrential downpours that can aggravate existing flooding and lead to new issues over the lower part of the Mississippi and Tennessee valleys.

Locally severe storms that erupt on Thursday are likely to hold off until late in the day or at night. Areas extending from the southern Appalachians to the central Gulf coast are at risk for severe weather, according to AccuWeather Senior Storm Warning Meteorologist Eddie Walker.

The main threats from these storms in addition to flooding downpours are likely to be strong wind gusts and hail.

As a disturbance in the jet stream pivots southeastward from the Rockies to the Plains on Friday, more robust storms are possible.

The storms are expected to erupt near the edge of a zone of very warm air that could lead to some daily record highs being challenged in Texas on Friday. Temperatures are projected to climb into the 80s and 90s F over a broad area of Texas. A few locations, such as San Antonio, may come to within a few degrees of 100 F.

“With a fresh influx of Gulf of Mexico moisture in the form of humid air, combined with wind energy at the middle layer of the atmosphere associated with the approaching disturbance, the ingredients are there for severe weather on Friday and Saturday,” AccuWeather Senior On-Air Meteorologist Justin Povick said.

The coverage and intensity of severe weather may hinge on the amount of sunshine available.

“Part of the atmospheric environment on Friday and Saturday may be strewn with clouds that limit daytime heating in part of the area at risk for severe weather, but where the sun breaks out, tall storms can erupt and pack a punch,” AccuWeather Chief On-Air Meteorologist Bernie Rayno said.

The main batch of severe weather is forecast to erupt in the central and eastern portions of Texas and Oklahoma during late Friday afternoon and evening and progress eastward into parts of Arkansas, Louisiana, Mississippi and western Tennessee on Friday night.

All forms of severe weather are possible on Friday night. The storms have the potential to produce strong wind gusts, large hail, frequent lightning strikes and isolated tornadoes.

While a large number of tornadoes do not appear likely at this stage for Friday night, the potential for tornadoes to occur after dark will pose an added risk. The storms will be much more difficult to see and could occur after some people have gone to bed.

With any severe weather threat, the AccuWeather app can greatly help with timing of storms and be a source for receiving the latest severe weather watches and warnings as they are issued.

The threat of severe storms is forecast to shift farther to the east on Saturday and focus from southeastern Louisiana and southern Mississippi to central and southern Alabama, the Florida Panhandle and southwestern Georgia.

This far out, the nature and scope of severe weather is still somewhat in question for the weekend. However, there is the likelihood of storms with strong wind gusts and frequent lightning strikes at the very least on Saturday.

Thunderstorms are possible each day from Friday to Sunday at Augusta, Georgia, and the site of The Masters golf tournament. The greatest potential for severe weather at the course is on Saturday evening, but any thunderstorm can produce dangerous lightning strikes.

There is the chance that severe weather continues on Sunday but across areas farther to the northeast. At the very least, showers and thunderstorms are forecast to ignite from the Carolinas to Pennsylvania, New Jersey and Delaware.

Much of the southern U.S. has had a week of quiet weather in terms of severe storms. Prior to Wednesday, April 7, the last general severe weather day was on Wednesday, March 31, when there were nearly three dozen reports of damaging winds, a handful of reports of large hail from Mississippi to Virginia, according to the National Weather Service Storm Prediction Center. The severe weather included one tornado that was rated as an EF0 in Hayden, Alabama.

March was a very busy month in terms of severe weather in the South with hundreds of incidents of damaging storms that included dozens of tornadoes. Some of the tornadoes were strong, devastating and deadly, including a single tornado that killed five people in Calhoun County, Alabama, on March 25.