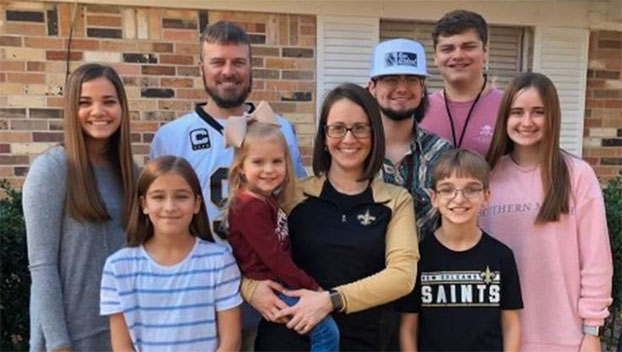 A 43-year-old father of seven from Ocean Springs suffered a stroke hours after receiving the Johnson & Johnson vaccine.

Brad Malagarie was otherwise healthy before he suffered the stroke April 6 while at work. He had gone on his lunch break to get the vaccine and had the stroke later that afternoon, said his aunt, Celeste O’Keefe.

Malagarie had the most common form of stroke, an ischemic stroke, which is caused by a blood clot in an artery leading to the brain. He is being treated at Ochsner Medical Center in New Orleans, O’Keefe said.

She said that Ochsner reported the stroke to the Vaccine Adverse Event Reporting System managed by the U.S. Food and Drug Administration and the Centers for Disease Control and Prevention.

“He didn’t jump out of an airplane,” O’Keefe said. “He didn’t eat anything different. Nothing was different in his life except the vaccine. Whatever happened to Brad, it was a contributing factor.”

The FDA and CDC on Tuesday recommended “a pause in the use of this vaccine out of an abundance of caution” after six women ages 18 to 48 developed a rare and severe type of blood clot — cerebral venous sinus thrombosis — six to 13 days after Johnson & Johnson vaccinations. Use of the vaccine is suspended until the cases are reviewed.

Mississippi and most other states have announced that the vaccine will not be available for the time being.

The CDC and FDA had by April 2 recorded a total of 32 ischemic strokes following COVID-19 vaccinations. The reported strokes are considered “serious adverse events” and are being investigated.

“CDC and FDA will request medical records and study these cases,” a CDC public affairs specialist said in an email to the Sun Herald. “They will look at possible links to all three vaccines: Pfizer, Moderna and J&J.”

Only one ischemic stroke was reported after a Johnson & Johnson vaccination, with 10 reported cases for the Moderna vaccine and 21 for the Pfizer BioNTech vaccine. By comparison, 195 million doses of the three vaccines were administered through April 13.

The most common symptoms, including low-grade fever or fatigue, usually resolve within a day or two and are a sign, doctors say, that the body is building immunity to COVID-19.

After this story was first published at sunherald.com, the Mississippi State Department of health emailed a statement to the media that said, in part:

“The Mississippi State Department of Health is saddened to hear about the recent illness of Mr. Malagarie and wishes him well.

“The agency is certainly investigating the situation. It is difficult, if not impossible, to assign a cause and effect at this time.

“It is important to note that strokes are not associated with this vaccine – instead a rare clotting syndrome has been identified.” The statement also noted the longer time lapse between vaccination and clotting disorder and the fact that all those who suffered the disorder were women.

Malagarie wanted to get a COVID vaccine because he was about to attend a trial for Dancel Multimedia, where he works as a media technician. The D’Iberville company provides video, graphics and other support for attorneys.

“He works around a lot of people,” said O’Keefe, who co-founded Dancel with her husband. “He wanted to be safe for everyone else.”

He returned to work after he got his shot. Later that afternoon, Malagarie complained that his right arm, where he got the injection, was hurting.

An hour or so later, a co-worker noticed Malagarie staring at his computer screen and couldn’t get a response from him. He seemed to be in a trance. His fellow employees called 911.

O’Keefe said his co-workers suspected a stroke because Malagarie was unable to talk or move his right side.

His family had him transferred from Memorial Hospital at Gulfport to Ochsner in New Orleans. He was admitted to the neurocritical care unit a week ago but has since improved enough to move to the floor where stroke patients are treated.

O’Keefe said the family has been told that rehabilitation could take up to a year. They are hoping to get Malagarie admitted to a topnotch stroke rehabilitation center in Atlanta.

O’Keefe set up a Facebook fundraiser page, Stroke After J&J Vaccine, to raise money for the many expenses his family will face because of the stroke. Dancel plans to donate up to $10,000 to match contributions, which stood at more than $36,000 on Tuesday afternoon.

Wife Cori, a trainer for casino restaurant employees, is not working right now so she can be at her husband’s side.

A “meal train” has been organized so people can sign up to deliver meals, or donate money for meals, for the Malagaries’ children.

“Everyone that knows him knows he’s a really good guy, a great Dad,” said his co-worker Kerry Atkinson.

Malagarie was raising three children when he fell in love with future wife Cori. He texted her by accident on his cellphone and, from there, a relationship blossomed, O’Keefe said.

Cori Malagarie also had three children when the couple married. They have one child together. Their children range in age from 22 to 4. The Malagaries keep a family calendar to track the activities of the four children still living at home, including cheerleading, dance and baseball.

Brad Malagarie’s co-workers describe him as quiet, calm and funny. He would blow an air horn without warning or play a funny video to break up tension while everyone prepared for a big trial.

He worked hard and was willing to do anything around the office, O’Keefe said, including taking out the garbage.

Kerry Atkinson said Malagarie was the go-to person for friends who needed advice. If he could help, she said, he would.

What happened to Malagarie still seems unreal, O’Keefe said. Doctors can’t rule out the Johnson & Johnson vaccine as the cause of his stroke, she said.

She said, “We’re all right now walking around like we’re in a movie and it’s going to go away and he’s going to walk up,” she said.

This story is republished with permission from the Biloxi Sun-Herald.

New coronavirus cases remain steady in Mississippi as all…