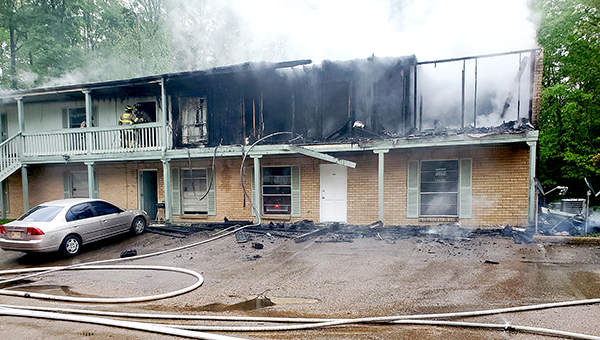 A lit candle knocked over in a bedroom was the cause of an early Thursday morning fire that destroyed two apartments at the Azalea Trace Apartments on Fisher Ferry Road.

Warren County Fire Coordinator Jerry Briggs said an individual in the bedroom knocked the candle over, causing it to fall on the floor, where it ignited several items. The residents of the apartment were unable to extinguish the fire and ran out of the apartment. The apartments had electricity, he said.

The fire occurred about 6:26 a.m. and the first firefighters on the scene reported heavy fire coming from two top floor apartments on one end of complex’s building No. 7. All the occupants of the building managed to get out before firefighters arrived.

“It was fully involved,” Briggs said. “We contained the fire to the two apartments.”

He said firefighters checked the ceiling of an adjacent apartment, adding it had smoke damage. The other top floor apartments were not damaged, he said, and the apartments on the lower level had water damage from the fire.

He said the fire rekindled later in the day but was in one spot in the burned apartments and quickly extinguished.

Briggs said the American Red Cross was called to help with people displaced by the fire.

Fisher Ferry, Bovina, Culkin and Northeast firefighters and the Vicksburg Fire Department responded to the fire.