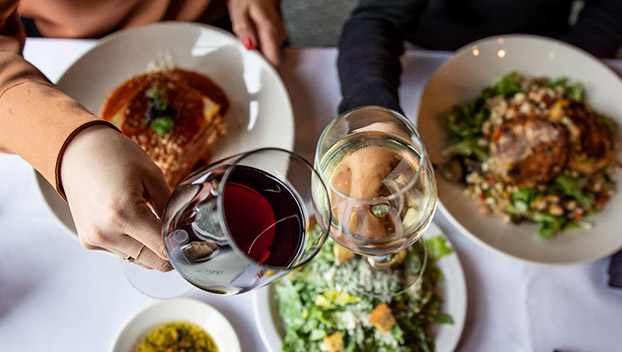 Whether it is the five-layer lasagna, cedar-roasted fish of the day or the tiramisu with vanilla cream and Kahlua chocolate sauce, one Mississippi restaurant has been satisfying hungry appetites for more than 30 years.

More than 3 decades later, Amerigo is opening its sixth restaurant and its first venture into neighboring Alabama.
A neighborhood eatery specializing in classic Italian fare, Amerigo announced its sixth location in the new Market at Hays Farm in Huntsville. Amerigo’s will occupy 7,573-square-foot space at the South Huntsville development that will be the brand’s first Alabama site. The new restaurant will bring a blend of traditional and modern Italian cuisine along with its welcoming comfortable atmosphere in late 2021.

Opening Amerigo in Huntsville has been a goal of 4Top Hospitality, owners of Amerigo, after the successful opening of its Char Restaurant in 2019—another concept in 4Top’s wide portfolio of branded restaurant concepts. Char, located on Bob Wallace Avenue, has become a local favorite in the Rocket City, and led to discussions around expanding its other concepts.

“Given the warm reception we received when we opened Char, in addition to the number of guests I’ve met from the Huntsville area frequenting our Amerigo in Brentwood, Tenn., we made opening another location in Huntsville a priority,” said Doug Hogrefe, co-owner of Amerigo. “As Huntsville and Madison County continues to grow, we couldn’t be happier with the site we’ve chosen in South Huntsville.”

Since opening its first restaurant in Ridgeland, Miss., more than 30 years ago, Amerigo has become a crowd favorite and added locations throughout the Southeast. Its consistently delicious menu along with quality customer service, casual atmosphere, and approachable price points have made Amerigo a mainstay in the industry. The eatery has stayed true to its roots, serving traditional classics, as well as new modern staples like the Five-Layer Lasagna, Cedar-Roasted Fish of the Day and Tiramisu with Vanilla Cream and Kahlua Chocolate Sauce. The menu has several options for vegetarians and gluten-free diets as well. Amerigo locations embrace their local communities, valuing partnerships with local farmers and purveyors to provide guests the freshest local ingredients.

Amerigo Huntsville will be open for lunch and dinner seven days a week and offer brunch from 11 a.m. to 2 p.m. on Saturday and Sunday. Guests will be able to enjoy patio seating, private dining space, a full bar, and a comfortable dining room. Catering will be available at the Huntsville location for pickup and delivery.

Amerigo is a neighborhood eatery specializing in classic Italian fare with locations in Jackson, Miss., Memphis, Tenn., and Nashville, Tenn.  The eatery has stayed true to its roots by offering many of its core menu items that were created in 1987, as well as new modern selections that showcase local produce, products, and fresh ingredients. Amerigo Huntsville will be located at The Market at Hays Farm, a 111,233-square-foot shopping center in the up-and-coming Hays Farm area of Huntsville.

The restaurant is part of 4Top Hospitality Group which owns and operates 15 restaurants across the Southeast, including Amerigo, Char, Jasper’s, Saltine, Etch, etc., Anjou and Sombra. For more information visit www.Amerigo.net.