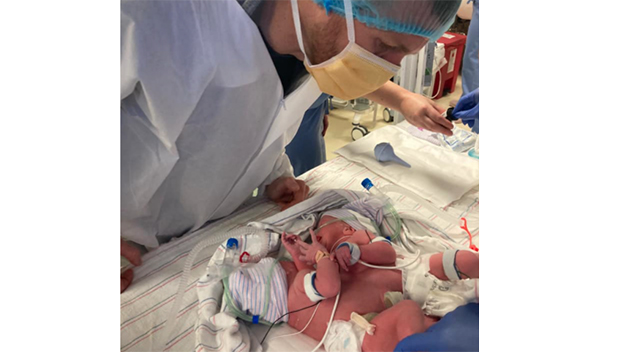 An Alabama pastor and his wife celebrated the birth of conjoined twin baby girls at a Philadelphia, Pennsylvania, hospital Thursday morning.

Susannah and Elizabeth Castle, the daughters of  Stephanie and Dwight Castle, were born at 10:06 a.m. at Children’s Hospital of Philadelphia. Dwight Castle is the pastor of missions at Redeemer Community Church in Avondale.

“The girls are beautiful and sweet and we love them so much already even though we haven’t been able to see them a lot,” the couple posted on social media. “They both need some supplemental help with breathing, and Elizabeth especially has not transitioned her breathing fully, so is on a CPAP. Please pray that they both keep breathing better, as this is the main thing they will watch for the first days.”

The baby girls are connected at their chest, down to their belly buttons.

The Castles also have three other children under the age of 7.

Before the birth, Dwight talked about the challenges that lay ahead for the family.

“I think in a lot of ways, God has sort of been preparing us for this for a while,’’ Dwight said. “We’ve grown certainly in awareness of how challenging it’s going to be and knowing we probably don’t know the half of it. But we have an increasing faith in the Lord that He is so clearly over this and providing for us.”

The Crestwood couple found out in September that they were expecting. They already have two sons, ages 6 and 3, and a 2-year-old daughter. “We were on the fence about whether to go for a fourth child. We had a lot of different things we had walked through in the prior years that had been difficult with our family growth and planning,” Dwight said. “We had a miscarriage. We had some infertility. We were foster parents, and we had some hard, difficult foster situations. But we said, ‘Ok, let’s try for four,’ and then we found out we had five. That was very overwhelming.”

It was early November when the Castles had that prognostic ultrasound. Within a couple of minutes, the tech summoned the doctor, ‘’which is never a great sign,’’ Dwight said.

The doctor explained to them that the babies were in the same amniotic sac which is a very rare type of twins and fraught with potential complications for the pregnancy. Conjoined twins were a very unlikely, but possible outcome. It was more likely that they could lose one or both of the babies in a variety of ways. “We left that appointment reeling with a lot to consider,’’ he said.

One month later, they had their first appointment with maternal fetal specialists at UAB and it was then confirmed the twins were indeed conjoined. Susannah and Elizabeth have separate heads, separate brains and separate limbs. The big question was if they had separate hearts because that would determine whether or not there was a path toward separation.

“The good news is they do. They’re extremely close They’re literally touching each other,’’ Dwight said. “They share the lining around the heart – the pericardium – but that’s not preventative for separation.”

The girls also share a liver and probably a portion of their small intestines. The liver is the only organ in the human body that regenerates so doctors will basically split the liver in two, with a half going to each girl.

There was a concern at one point that Elizabeth had major heart disease or defect, which would have significantly complicated the separation possibility. “That was a huge question mark,’’ Dwight said.

The Castles were sent to Children’s Hospital of Philadelphia, which is one of the leading hospitals in the world for dealing with conjoined twins. They went three weeks ago for a consultation and learned that Elizabeth doesn’t have a heart defect. It’s basically not formed in a way that is normal for most, but it is fully functional.

“It’s an anatomical anomaly – they had to go look in a 1970s textbook to identify what this was because he’s only seen one other time in his career and that was 30 or 40 years ago,’’ Dwight said. “That was a huge answer to prayer for us and they gave us the news that they believed they were separable and would like to do that.”

When the girls are deemed healthy and stable enough, the entire Castle family will temporarily move to Philadelphia for the separation surgery. There is a three-to-six-month tissue expansion process that is the stretching the skin so that when the twins are separated, they can just cover the open sections with their own skin instead of grafts.

“Then they’ll have the separation surgery and recovery and then we’ll come home,’’ Dwight said. “That will take at least six or eight months, bare minimum, if not double that, so we’ve got a long year ahead of us.”

“The doctors at CHOP told us, ‘You really don’t understand how favorable the conditions are for your daughters to be able to be separated and that, as best as we can predict at this point, live normal and healthy lives,’’’ Dwight said “Now, we don’t know. It’s in the Lord’s hands. There are harder things in life that I think people go through. We know people walking in grief and suffering but this might be the strangest thing.”

Dwight said their family, friends and community have been incredibly supportive.

Dwight, originally from North Carolina, has been with Redeemer Community Church since it started almost 13 years ago, and was previously doing overseas mission work. He met Stephanie, who is an Alabama native, through the church.

“We see everything in life through the lens of our faith. Everything scripture teaches us things are from Him and through Him and to Him. Even, and especially when we walk through extremely challenging times, that’s how we’re going to view everything,’’ Dwight said. “This certainly brought up unbelievably really hard questions for us. The things I’ve said I believe, and I know I believe, now I’ve got to grapple with that on a different level. How do I reconcile these things – God’s goodness with the age-old question, ‘How can a good God allow that?’”

He said they’ve tried to be open and honest with friends and family about the process of their faith throughout this, “but also holding on to the fact that our only hope in life and death is Jesus and that we believe that his death on the cross not only purchased our forgiveness of ours sins but gives us hope in this life in the middle of our struggles.”

“So, grappling with that in our head versus our heart is what a lot of this journey has been, but it’s been the only thing that has sustained us,’’ Dwight said “The community – our blood family and our faith family – has just been unbelievable with constant support and encouragement. It really has been the blessing besides just growing to try to trust the Lord through this more. Our faith family really has surrounded us in a way that has never left us alone or to wrestle with things on our own.”

“One thing I would say, too, at the beginning, we walked different journeys,’’ he said of he and his wife. Both were shocked to learn they were having twins, even before they knew the girls were conjoined.

“Then the Lord kind of flipped a switch with Stephanie and just gave her a peace that has sustained her still,” he said. “She has had this kind of undeniable hope and peacefulness in her heart that really has been grounding for both of us. My experience has not been that. God didn’t create babies in the beginning to be conjoined. It’s a part of the fall and the broken world we’re in and that’s not how it’s supposed to be.”

“But we believe there’s purpose in this. It’s not aimless. It’s not hopeless. God created the world and His sovereignty rules over it still,’’ he said. “He’s always promised us that He’ll be with us – that’s the biggest spiritual lesson we’ve been learning. He’s not a God that puts us through hardship and then leaves us. He has met us every single step of the way with very particular answers to prayers.”

“We’re going to have a lot of help. He gives us new mercies each day and He’s faithful to do that. We just try to take it a day at a time and remember His faithfulness every step of the way and it really does fuel us to trust Him,’’ Dwight said. “That doesn’t guarantee they’ll live. It doesn’t guarantee the separation will happen or that it will go really well. There’s a lot of hopeful indications for all of those things, but our hope has to ultimately be in Him.”