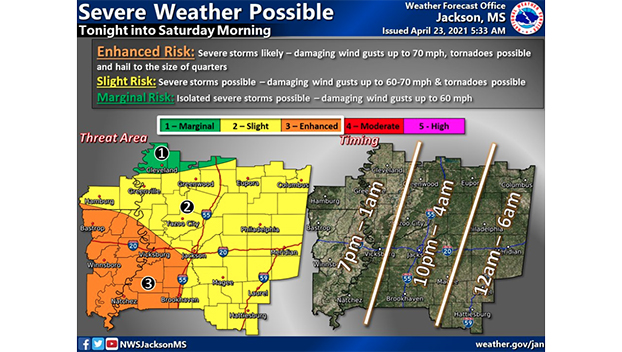 A dangerous weekend is in store across the South as large areas of severe storms are expected to fire up from Texas to the Atlantic coast.

Storms bringing hail, damaging winds and flooding downpours are forecast to ignite across the region this weekend.

“Storms this evening and tonight, some could be strong to severe,” the NWS office in Jackson said on Twitter Friday morning. “Damaging wind gusts may be the primary threat, but a few tornadoes could also be possible. Should you be travelling to the coast for the weekend, rip current risks will begin to increase tonight.”

Storms should enter the state at the Mississippi River around 7 p.m. Friday evening and move across the state through early Saturdau morning.

The southwest corner of the state is under and “Enhanced Risk” of severe weather, including damaging winds up to 70 mph with tornadoes possible. Hail the size of quarters is possible the National Weather Service says.

Humidity levels will increase on Friday across the southern Plains as the Gulf of Mexico feeds moisture into the region, and a warm front is forecast to sweep through.

“Severe weather is possible across the area, mainly Friday afternoon through very early Saturday morning,” the NWS office in Shreveport, Louisiana, said on Twitter Thursday. The NWS office in Birmingham, Alabama, and several other offices echoed this sentiment as well.

“Damaging wind gusts, flooding downpours and isolated tornadoes are possible with any of the storms,” Adamson said.

However, as storms initially develop, very large hail will be the main concern.

One of the primary concerns across much of the Southeast is going to be flooding downpours, despite how quickly these storms will be moving. Heavy rainfall from the potent storm can cause flash flooding across an already rain-soaked Southeast.

Areas in northern Louisiana and central Mississippi are expected to be hit particularly hard by intense rainfall through the weekend.

As of early Friday morning, the Ouchita River at Felsenthal Lock and Dam in Arkansas was at minor flooding stage, along with several other locations across the region. This includes multiple spots along the Mississippi River between Louisiana and Mississippi.

By Saturday, storms with heavy rain will reach Alabama through South Carolina. Birmingham, Alabama, has recorded 3.27 inches of rain this month so far, just 0.05 of an inch above average.

“Given that much of Louisiana to Alabama and the Florida Panhandle has received 125-300% of normal rainfall over the last 30 days, any additional heavy rainfall in this area will lead to rivers swelling quickly with a saturated ground,” Pastelok said.

In the heaviest downpours, the AccuWeather Local StormMax™ of 8 inches could be achieved Friday into Saturday, according to AccuWeather meteorologists.