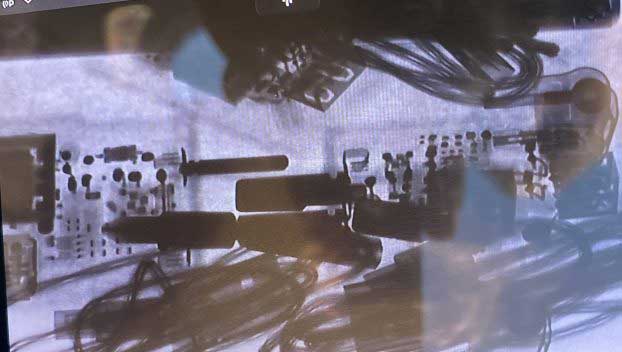 An X-ray provided by law enforcement investigators shows the contents of the package.

Tactical experts from the Memphis Police Department detonated a package thought to be a bomb on the steps of the Panola County Courthouse just before 10 p.m. Thursday night, more than nine hours after the small package was discovered.

There were no injuries and no apparent damage to the courthouse, or any businesses on the Square.

After the detonation, bomb experts were able to determine the package did not contain an explosive device. Federal agents had x-rayed the package about 5 p.m. and all indications were that it contained explosives.

Sheriff Shane Phelps, on the advice of the federal agents, announced both the Batesville and Sardis Courthouses would be closed Friday as investigators continued to gather evidence.

However, Phelps said once the package was detonated and investigators realized there were no explosives he was assured by Memphis Police bomb experts and representatives from the Bureau of Alcohol, Tobacco, and Firearms that it would be safe to re-open the Courthouses as usual on Friday.

The streets that were blocked off around the Square will not be blocked on Friday.

During the night, local deputies and federal agents will perform a sweep of the downtown area, including Batesville Elementary and Batesville Intermediate Schools to make sure the incident was a stand-alone.

The small package was found this morning when workers were using leaf blowers to clean around the Courthouse and the brick-sized object, wrapped in tan paper was seen after a pile of leaves was blown away.

Closed-circuit footage shows a person carrying a bucket approached the courthouse about 10:15 p.m. Wednesday night and apparently dumped the package and leaves.

When the leaves were blown away today, a deputy on duty at the courthouse saw the paper and thought it was trash. When he picked up the package to throw away he realized it was too heavy to be trash and set the package down on the courthouse steps where it remained until it was detonated.

Sheriff Phelps said he made the decision to clear the courthouse and block off most of the streets leading to the Square out of caution and on the advice of the tactical unit.

“The bomb squad agents and others believed we were dealing with a bomb when the x-rays were taken. It was on that advice that we kept people away from the area and made sure all the county workers were safe.”

“I’m very glad this turned out without any injuries or property damage,” Phelps said. “This is an example of how careful law enforcement has to be when we are dealing with the safety of our citizens.”

Phelps said deputies and investigators from the Sheriff’s Office, the Batesville Police, Memphis Police, FBI, and ATF were to be commended for their response and a long day of dealing with the disturbance.

The photo of the x-rays taken of the package clearly shows a series of wires and other components, including a cigarette lighter. It was the lighter that apparently had the K-9 until responding with a “positive hit” that alerted the bomb squad agents.

The person who left the package is being sought by local authorities and will be questioned about why he left the object at the courthouse.

“I know this was a long day for everyone involved and I’m glad there were no injuries,” Phelps said. “Our department took actions that were recommended by the experts in that field, and I’m glad that we are now able to announce the courthouses will be open as normal.”