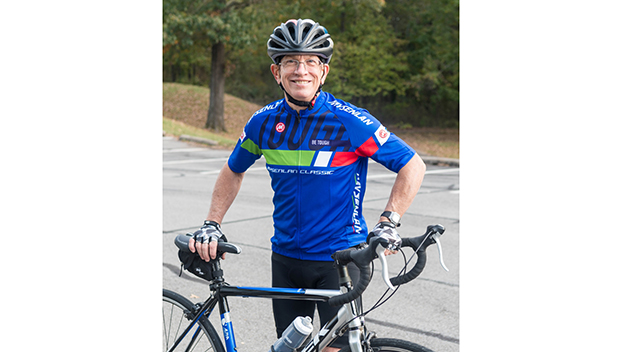 There was nothing too daunting about a 500-mile cycling trek to four high school boys living in New Orleans in 1976.

Scott Williams, then a 16-year-old schemer, mapped it. They’d pedal out of southeast Louisiana and into Mississippi, make their way up to Vicksburg and cycle back. They would ride two legs of the Natchez Trace Parkway. It would take a week, maybe more.

On Father’s Day nearly 45 years ago, with brimming packs slung across their backs and teenage will to guide them, the rising high school seniors took off.

It was easy all those years ago.

The ride was for adventure back then, Williams, the Mississippi native, says. But the cycling trip he’s on now, spanning the entire 444-mile Natchez Trace Parkway, is different. It’s his boyhood dream. And it means so much more.

“This ride right here is for something much more transcendent and eternal,” he said.

Williams, now 61 and living in Little Rock, Arkansas, has a rare and terminal brain cancer — glioblastoma multiforme. Doctors told Williams when they diagnosed him in September 2019 that he had only 12 to 18 months left.

He knows this may not be a battle he can win. But feeling strong and wanting to promote a cause, his trek on the Natchez Trace is a fundraiser for people with cancer and those affected by it.

“Erase the Trace,” Williams calls the cycling journey that he says might be his last.

It’d been over four decades since Williams had done any serious cycling.

As he was recovering from his craniotomy in 2019, doctors said rigorous exercise would help. He dusted off an old bike and began to ride. Last fall, inspired by Olympic figure skater and cancer survivor Scott Hamilton’s book, “The Great Eight,” Williams wanted to make an impact.

He knew who to call.

Williams reached out to the Scott Hamilton CARES Foundation. Its mission to change the face of cancer research funding was just what he was looking for.

Within hours, Williams had an answer.

“How could we not help him?” Hamilton said via email Wednesday to the Clarion Ledger. “For someone that has endured so much to take on Erase the Trace is legendary.”

In the months before he set out for the Trace, Williams kept thinking about the trail. What it held. What it meant.

It held all the best memories. It meant everything.

When Williams was young and living in Mississippi, he and his father would fish at spots along the Trace. The family would take car rides on it. But most of all, he couldn’t shake from his memory the cycling escapade with his three high school friends.

As it happened, the four had parted ways once they graduated O. Perry Walker High School in Algiers, Louisiana.

Williams was the writer even then. One was a reader, the other a sports aficionado. Then there was David Wisdom.

“I was the goof,” Wisdom said.

More than 40 years had passed since Williams and Wisdom spoke. Williams reached out to Wisdom last August, telling him the new plan he’d hatched. This one wasn’t like the trek he drew up in 1976.

The cycling trip this time around was backed by Hamilton’s foundation and the Central Arkansas Radiation Therapy Institute. It was nuanced and emotional. A trip the two as young boys could’ve never imagined they’d be talking about as grown men.

Wisdom hadn’t been on a bike in decades, either. He’d been busy with work, his family and his own cancer journey, battling Stage 4 metastatic melanoma. June marks five years in remission.

Details of the shared 500-mile trip in 1976 aren’t all clear. Wisdom remembers an abandoned church and clunky bikes. Then there were pinpricks of towns that looked as though they hadn’t changed in 150 years. Many of the memories shouldn’t be shared, he laughs.

The journey now isn’t about making up for lost time, Wisdom says.

“We can’t really catch back up on 45 years,” he said. “We’re starting an old friendship new.”

The group set off Sunday, with plans to spend nine days on the trail with some resting in between.

When Williams rounded mile marker 102.4 Monday, he didn’t look to have broken a sweat from the 50 miles he had cycled by mid-afternoon.

That’s because he’s behind Johnny Burrell, Williams told his friends and family gathered at the mile marker.

Burrell, an endurance cyclist for the Scott Hamilton CARES foundation, said he’s really more like Williams’ shadow. While he’s in the front biking, providing a wind break and lessening the energy Williams has to expend, he wants none of the spotlight during the trip.

His job is to get Williams to the end of the Trace safely. He reminds him to drink water, keep up his caloric intake. He sets the pace so Williams can make the trip. Burrell needs to always look a few days ahead.

This trip is difficult for a regular cyclist, Burrell said. But Williams continues to defy all odds.

“He’s remarkable,” Burrell said, adding Williams comes in with a pace around 17 mph. “A lot of people would hang it up. But he’s doing this in a very selfless way to raise awareness.”

It’s awareness that pulls at Burrell’s heart. He lost his wife to ovarian cancer in 2009.

But this is about Williams, Burrell said. When he takes the cycling helm he’s thinking about Williams’ safety, his needs, how he would take the hit if a car were to swerve their way. And sometimes a thought creeps in: “I might never see him after this.”

Burrell gets choked up. He pauses, apologizes and says he knows the feeling that will surge through Williams when he achieves that long-held boyhood dream of cycling the entire Trace.

Williams has thought about that, too.

“I was familiar with the lower Natchez Trace, but I was hearing it was really pretty in the northern part, close to the end,” Williams said. “Even thinking as I get close to the end of the Trace, it could be representative of the end of my life.”

But his Natchez Trace journey is not the end. It is just the beginning.