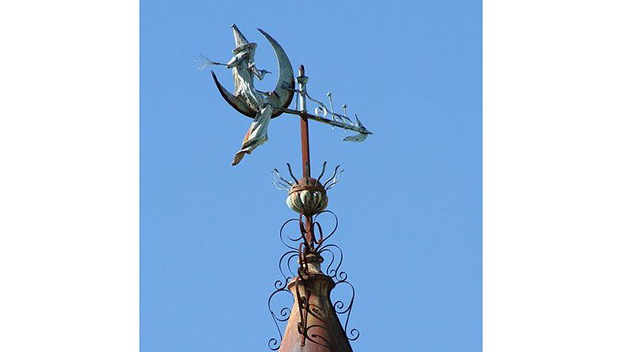 The Peoples Bank in downtown Biloxi opened 125 years ago last month, and has what probably no other bank in the world can claim.

The bank’s official logo is a Biloxi lugger boat, adopted in 1956. Yet its “mascots” are a gargoyle with the body and glare of a dragon and a witch on her broomstick weathervane.

The witch flying across a fingernail moon has been immortalized on Christmas ornaments and is one of the most recognizable landmarks in Biloxi after the lighthouse.

“The gargoyle, which was the finial on the south end of the ridge of the roof, was taken down in 1970 for repair when a new roof was put on,” wrote the late Glenn L. Swetman in his “A Banker’s Daybook” that chronicles the history of The Peoples Bank.

Made of zinc, the gargoyle deteriorated in the salty air of South Mississippi. In 1999, as the Coast celebrated its Tricentennial, the witch was restored, the gargoyle was put back on the roof and a street clock was erected in memory of Glenn, a strong advocate of Coast historic preservation, according to an account in the Sun Herald..

W.T. Harkness, the architect of the first building of The Peoples Bank, directed that a solid-copper weathervane sit atop the roof of the distinctive turret of the building.

The witch weathervane has remained perched atop that spire of the old bank building since it opened in 1897, “flying” down in just three storms. That was in 1947, during Hurricane Camille in 1969 and Hurricane Katrina in 2005, said Chevis Swetman, bank chairman and CEO.

She was thought to be one-of-a-kind. Glenn Swetman, then bank chairman, refused to sell her for $1,000 when the buyer of the George Ohr pottery collection also wanted the witch.

Then a feature article in the March 1988 issue of Architectural Digest showed the Biloxi witch has a sister.

“I too felt I had THE vane,” the owner of the second witch weathervane wrote to Glenn Swetman, who had contacted him through the magazine. The man lived in New York City and had a collection of more than 100 weathervanes.

“The vanes were obviously made by the same person as the arrow, attaching bars and all at the base are identical,” the collector wrote. He didn’t know where they were made, when or by whom. He purchased his witch vane in 1970 in Bristol, Tennessee, from people who had owned it for more than 40 years. It supposedly originated from an estate in northern New York, the man said.

“It is my favorite vane — why it occupies the space over the fireplace,” he said, as was pictured in the magazine. “I love the expression on her face and the element of humor,” he wrote.

The two witches are slightly different, with the Biloxi version having flared brushes.

“Given the choice, I think I prefer your design,” he told Swetman.

The first bank building of The Peoples Bank was constructed for about $7,000 and opened in January 1897 at the corner of what is now Howard Avenue and Lameuse Street in downtown Biloxi. Each office had its own fireplace.

Biloxi was the seventh-largest city in the state at the time, with a population of 5,467 as the seafood industry grew. The only other bank, The Bank of Biloxi, was organized three years earlier, and according to “A Banker’s Daybook,” most of its officers and directors were the seafood factory owners.

Years later, upon the death of Glenn Swetman in 1994, Chevis Swetman said, “My father is more or less credited with saving the seafood industry on the Coast following those Depression years of the ‘30s and ‘40s. Because of that, our bank became the primary lender of the seafood industry for the next 50 years.”

In 1913, construction began diagonally across the street from The Peoples Bank on a new Harrison County Bank.

Before the bank with its Italian marble floors and bronze grillwork was complete, the federal Banking Reform Act was enacted.

Harrison County Bank couldn’t come up with the funds to qualify as a national bank, Chevis Swetman said.

In 1914, the same year President Woodrow Wilson stayed in the “Southern White House” down the road in Pass Christian, The Peoples Bank took over the new bank building for $2,000 and the 10-year lease of $400 a month.

Just like his father, Chevis Swetman has preserved the history of the two buildings.

This month the carpet at the entrance to the Biloxi bank was removed to reveal the original tile floor that spells out Harrison County Bank, for whom it was built but never occupied.

“When we pulled it up everybody really seemed to like it,” Swetman said.

The Swetman family has been associated with the bank since it was founded in 1896. J.W. Swetman was one of the founders. His brother, Orcenith George (O.G.) Swetman joined the bank as an assistant cashier in 1903. O.G’s son, Glenn Swetman, was president and CEO from 1951 to 1963. His son, Chevis Swetman, succeeded him in December 1983 and his son Tanner, the fourth generation, now works at the bank.