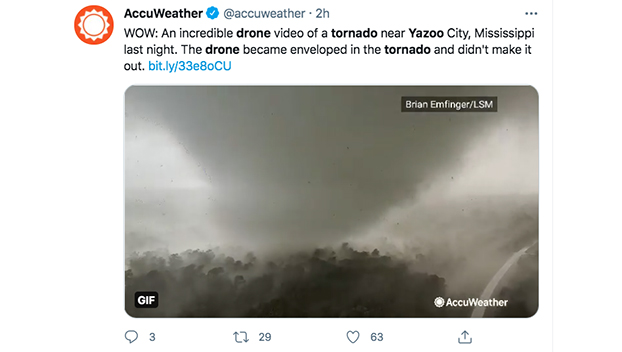 Nearly 100,000 Mississippi residents were under a tornado emergency on Sunday night.

One videographer captured a video of just one of the tornadoes that made its way across the state.

Drone footage captured by Brian Emfinger of Live Storms Media gave unparalleled footage of the massive twister working its way over Yazoo City, Mississippi. The power of the tornado’s inflow cut the connection between the drone and Emfinger’s control, as he lost the device shortly after recording the powerful scene.

WOW: An incredible drone video of a tornado near Yazoo City, Mississippi last night. The drone became enveloped in the tornado and didn’t make it out. https://t.co/OGli4uvP9m pic.twitter.com/AMIMIpzpKE

Click here for a link to the full video of Emfinger’s footage.