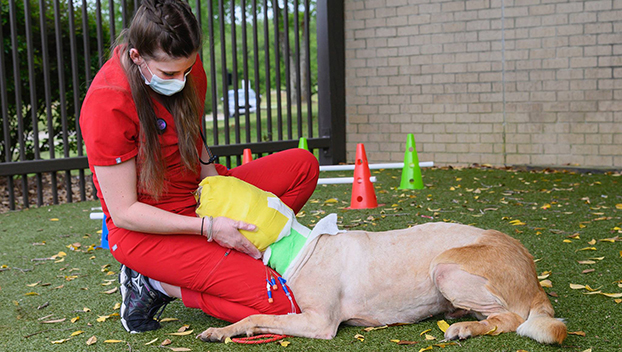 A north Mississippi sheriff says he wants to change state law after he was unable to file criminal charges against a child accused of torturing a dog.

“The law in our state, as it stands right now, is that no person that has not reached the age of 13 can be charged with any crime,” Tate County Sheriff Brad Lance told WREG-TV.

Officials say a Tate County juvenile confessed to tying an electrical cord around the dog’s neck and setting it on fire.

The Labrador retriever, named Buddy, was found April 22 and is being cared for by the Mississippi State University College of Veterinary Medicine. Tunica Humane Society Director Sandy Williams wrote on Facebook on Sunday that Buddy continued to improve after getting skin grafts on Friday.

“The swelling in his face continues to go down, she wrote. “He is beginning to look like a dog again.”

Williams said she was unaware that under Mississippi law, the juvenile who admitted to burning Buddy can’t be prosecuted.

“People are outraged that it doesn’t appear, because of the law, nobody’s going to be held accountable here,” she said.

Lance said the child, if an adult, would be charged with felony animal cruelty. The sheriff wrote on Facebook that “things are being done regarding this juvenile” that he couldn’t share. Lance said he has already contacted a Mississippi lawmaker seeking a change to state law to allow for some kind of charges.

“Laws cannot be changed overnight,” Williams. “We need to take all this anger and frustration and do something good with it. And we can do that by contacting our state legislature and get them to step back and take another look at the laws concerning juveniles.”

Lance said deputies are also investigating a possible threat to the child after someone offered a reward on social media for the identity of the juvenile’s family.
The dog’s owner handed over the dog to authorities and said he couldn’t afford to care for the injuries.