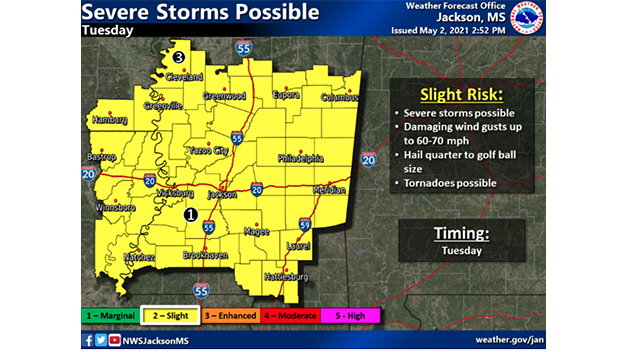 A threat of severe weather returns Tuesday with the possibility of damaging winds, quarter-size hail and tornadoes.

The National Weather Service in Jackson says most of Central Mississippi will be under a Level 3 “Enhanced” risk of severe weather.

Storms are expected to develop at noon and last into the afternoon and evening.

A surge of moisture from the Gulf of Mexico along with an advancing cold front will bring the threat for large hail, intense lightning, flash flooding, damaging wind gusts and even a few isolated tornadoes to the area.

Severe weather will rumble these regions and storms are expected to bring flooding downpours, hail, damaging wind gusts and the renewed threat for tornadoes Tuesday through Tuesday night.

Flash flooding is especially likely in areas of the South where many locations across the Gulf Coast have received over a foot of rainfall in April, which is more than double their monthly April rainfall.

Motorists traveling in these regions should remain on alert for rapid changes in visibility due to heavy downpours. Flash flooding also can be dangerous for motorists. Attempting to drive across any flooded roadways is strongly discouraged.