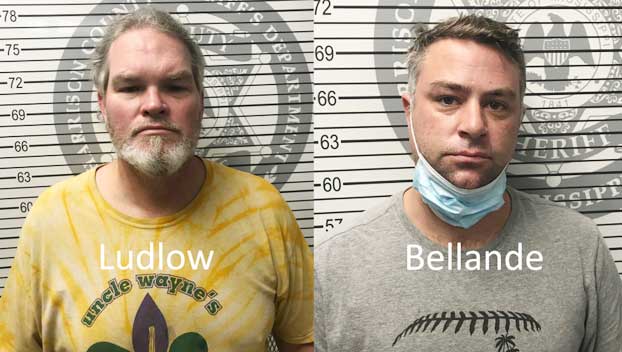 Two former school maintenance workers were arrested Wednesday after being indicted for fraud and embezzlement.

Mississippi State Auditor Shad White announced Special Agents from his office arrested Michael Ludlow and Mickey Bellande, Jr. after both were indicted for fraud and embezzlement.

Both Ludlow and Bellande are former maintenance employees at the Biloxi Public School District. Demand letters were presented to both men upon arrest.

Michael Ludlow is accused of submitting fraudulent timesheets from October 2020 to November 2020 to embezzle money from the Biloxi Public School District.

He was allegedly absent from work during time he claimed to be present. Ludlow also purportedly conducted personal business at other times he was on the clock and being paid by the school district. Special Agents presented a $6,678.32 demand letter to Ludlow when he was arrested. The demand amount includes interest and investigative expenses.

Investigators also believe Ludlow purchased controlled substances during the workday while using a district-owned vehicle away from school property. This incident was referred to the appropriate law enforcement agency and is pending prosecution.

Mickey Bellande, Jr. also allegedly submitted fraudulent timesheets from May 2020 to August 2020 in order to embezzle from the school district. He is accused of clocking into work and returning to his home for extended periods of time. He also allegedly used a district-owned vehicle to conduct his own personal business. Bellande was issued a $2,870.99 demand letter when he was arrested. This amount includes interest and investigative expenses.

“I applaud the work of our investigators in this case and their cooperation with other law enforcement agencies to ensure the other illicit activities that were discovered will be fully investigated and prosecuted,” said Auditor White.

Both Ludlow and Bellande were taken into custody at their respective homes on Wednesday morning with assistance from other law enforcement agencies. Bond for both men will be set by the court. Both cases will be prosecuted by the office of District Attorney Crosby Parker.

No surety bond covers either man’s employment at the Biloxi Public School District. Surety bonds are similar to insurance designed to protect taxpayers from corruption. They will remain liable for the full amount of the demand in addition to criminal proceedings.