Mississippi to get little reprieve from soggy conditions this week 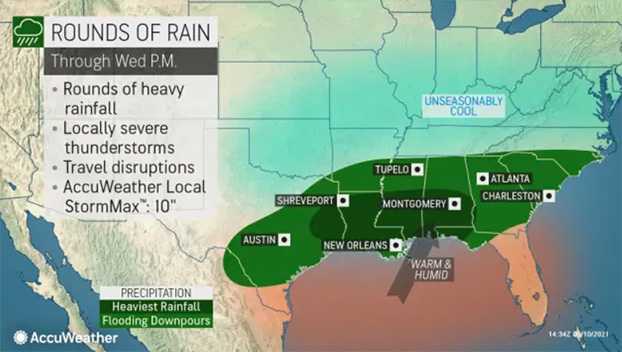 Reprinted with permission from Accuweather.com

There will be no rest for the rain-weary across much of the South this week as persistent rounds of rain and thunderstorms continue to track across the area.

After a cold front diving southeastward delivered the threat for severe thunderstorms across parts of the Plains and South during Mother’s Day weekend, it stalled near the Gulf Coast Monday. The front will remain in place for the next few days and serve as the impetus for more flooding rain and storms for areas that have already seen nearly two times their normal rainfall so far this spring.

“The persistent flow of cool air into the eastern U.S. is causing this boundary to persist and just sit near the Gulf Coast, acting like a road for rain and thunderstorms to form and move along,” explained AccuWeather Senior Meteorologist Paul Walker

Areas all the way from South Texas to North Carolina can expect some downpours through the middle of the week. However, the heaviest rainfall totals will focus on parts of far eastern Texas and into Louisiana and southern Mississippi and Alabama.

Since the beginning of April, New Orleans has already received nearly 20 inches of rain, over triple the average for this time period. Biloxi, Mississippi, and Mobile, Alabama, are similar, with Biloxi receiving just over 18 inches and Mobile just over 16 inches.

From Sunday night into Monday morning, nearly 4 inches of rain fell in Lufkin, Texas, bringing the rainfall since April to 300% of average there as well, and producing images of flooded roads and stranded vehicles. Rainfall totals of 2 to 4 inches were also reported already Monday morning around New Orleans, with more rain expected Monday and possibly Tuesday and Wednesday.

Earliest tropical storm on record forms in East PacificEnd in sight for late-spring chill in NortheastWave of snow returning wintry conditions to RockiesReed Timmer on getting ‘thisclose’ to a monster tornado
“Widespread rain amounts of an inch or two will stretch from South Texas to the Carolinas through Wednesday,” said AccuWeather Meteorologist Matt Benz. “However, where the heaviest rain falls, generally an additional 2-4 inches are expected, with some locally higher amounts where downpours are the most persistent.”

By the time the front finally moves out later this week and rain tapers off, some locations where the heaviest rain is expected could wind up with 4-8 inches of rainfall since Sunday, with an AccuWeather Local StormMax™ of 10 inches.

Thanks to the previous wet conditions and the additional heavy rain, river flooding is becoming more of a concern across the region, especially in far eastern Texas, Louisiana and southern Mississippi. Several rivers across the region are expected to reach or remain at action or minor flood stage through late week or even this weekend into early next week. A few of these include the Sabine River, Calcasieu River, Mississippi River and Pearl River.

The National Weather Service defines action stage as the level where “the NWS or a partner/user needs to take some type of mitigation action in preparation for possible significant hydrologic activity.” Minor flooding is said to cause minimal or no property damage, but can still pose some threat to the public.

The forecast for the Sabine River at Deweyville, Texas, issued Monday morning, May 10, 2021. (NOAA/USGS)
Still, the greater concern will remain flash flooding, with underpasses and drainage ditches likely to quickly fill with water at times.

“It can be impossible to tell just how deep water covering the road can be,” warned AccuWeather Meteorologist Adam Sadvary.

AccuWeather forecasters urge drivers to heed the phrase “turn around, don’t drown” when out on the road. “Downpours can also reduce visibility and make travel difficult, as well as make it harder to see flooded roads ahead. Flooded roads can also potentially stall vehicles,” said Sadvary.

While much of the attention will be on the threat of flooding, forecasters also warn that severe thunderstorms will also be lurking.

Eastern North Carolina and South Texas are a couple of areas that could have a relatively higher threat for severe thunderstorms with damaging wind and hail Monday afternoon and evening.

“Widespread severe thunderstorms are not expected, but some thunderstorms can bring locally damaging wind gusts and perhaps some hail as well at times through Wednesday,” Walker said. Waterlogged soil can also lead to trees being toppled easier by thunderstorm wind gusts.

Stronger high pressure moving into the East later in the week will finally shove the trouble-making front out of the area, and with it bring drier but cool conditions to end the week and head into the weekend.