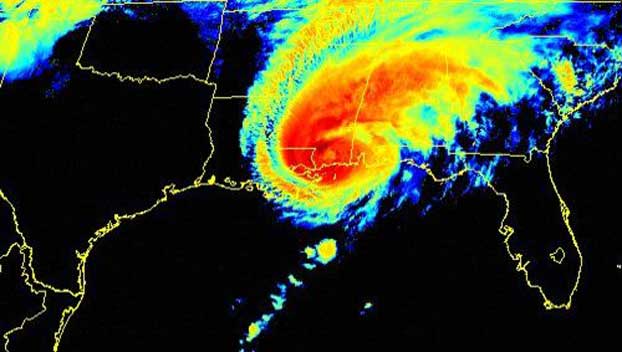 Hurricane Zeta, which swept through southeast Louisiana at the tail end of the 2020 hurricane season, has been upgraded to a major, Category 3 storm at Louisiana landfall, according to a federal report released Tuesday that underscored the intensity of the already record-breaking storm season.

The report by the National Hurricane Center said the storm led to five direct deaths and $4.4 billion dollars in damage in the United States. It also brought with it storm surge as high as 10 feet (3 meters) in Mississippi and parts of Alabama and some areas saw as much as 8 inches (20 centimeters) of rain. However, the NHC noted that Zeta was such a fast-moving storm that flooding associated with it was minimal.

Zeta was a late-season hurricane that first made landfall on the Yucatan Peninsula as a Category 1 and then again near Cocodrie, Louisiana, on October 28, punctuating a season that already battered southern Louisiana. In addition to Zeta, the other hurricanes that achieved major status include Laura, Delta, Teddy, Epsilon, Eta and Iota. Of those, Delta, Laura, Eta and Iota were the most damaging with Laura and Delta battering southwest Louisiana and Eta and Iota hammering Central America.

At the time Zeta made landfall, it was already known to be a strong Category 2 hurricane. But the report released Tuesday bumped its winds up slightly and pushed it over the Category 3 threshold. The Center said the sustained Category 3 winds would only have been felt over a small area at the coast near the landfall location and the change in intensity wouldn’t have had much practical significance.

But with the change, 2020 now ties 2005 for the most Atlantic major hurricanes in a single season on record, Phil Klotzbach, a hurricane researcher at Colorado State University, said on Twitter. Both 2020 and 2005 had seven major hurricanes.

The upgrade also means that Zeta is now the latest calendar year major hurricane to make landfall in the continental U.S., the report said. The previous record was set by the Tampa Bay Hurricane of 1921 that made landfall on October 25.
All the deaths happened in the U.S. Two people died in Jamaica from a mudslide although the NHC does not classify those as directly related to Zeta since it was not a tropical cyclone at the time.

The report released Tuesday details the hurricane’s origins, trajectory and things such as wind speed and storm surge when it made landfall.

The Center releases similar reports on every named storm that hits during a season. The reports on Laura, Iota and Eta have yet to be published.

The 2020 Atlantic hurricane season set multiple records while producing a record 30 named storms. There were so many that the list of 21 conventional names was exhausted and the Greek alphabet was used for only the second time.