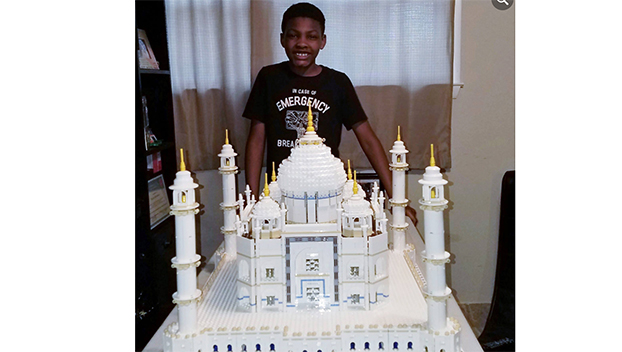 From the time Xavier McGraw was a toddler, there was something special about Legos. With most of his toys, says his mother, Julia McGraw, he would spend a few minutes playing and then move on to the next. But Legos were a different story. “He wouldn’t give up until he finished,” she says. “He would sit on the floor until it was done. What got me was his patience level with it.”

As he grew up in Birmingham, Xavier progressed to more and more difficult Lego building sets. “Mama, that’s a baby kit!” he would say, scoffing at the ones for his own age group.

When he learned that there was such a thing as Legoland in Winter Haven, Fla., it sounded like a dream to him. He begged his parents to go, but it’s not an inexpensive vacation. So Julia asked her son how he might contribute.

“I can build Legos!” he said – and he did. Thinking outside the box, literally, Xavier started making Santa Claus ornaments. His mom helped him start Facebook and Instagram pages for his fledgling business, Built by Xavier, through which he sells what Julia calls his “Lego art.”

Julia figured family members and a few friends would purchase ornaments, but then he sold out of them. Soon, he had money to help pay his way to Legoland in 2017.

While there with his parents, Xavier took a robotics class. “That’s where it really clicked for me,” his mom says. This toy her son had always enjoyed was honing some actual skills that would serve him well in life. “There’s a whole Lego world I didn’t know existed until this little boy came into my life.”

And Xavier now knew he had a way to earn money for things he wants. “After Legoland, I asked him if he wanted to keep going,” his mom says. “And he said, ‘I kind of like having money in the bank.’”

Since going to Legoland, Xavier has bought himself an iPhone and is close to having enough money for a new Xbox. But making money isn’t what it’s all about. Creating with Legos is “kind of relaxing to me,” he says. “Sometimes you have to have some patience. If you mess up, you have to do it again.” Despite his experience and skill, he says he still messes up “all the time.”

Now 12 years old, Xavier is a young man of few words. “He’s a low-key kid until he’s comfortable,” Julia says of her only child. A sixth-grade honor student at W.J. Christian K-8 School in Birmingham, his favorite subject is math. He enjoys playing video games with his friends – especially Minecraft, which, like Legos, is based on building – and driving his Traxxas high-speed remote-controlled car.

Two summers ago, she signed him up for Lego engineering camp at Shelton State Community College in Tuscaloosa. “He was nervous because I put him in the junior high group,” she says. “I told him, baby, I’m not paying for you to sit in there learning things you already know.” He ended up having a blast.

This year has been a busy one for Xavier so far. He was honored to be asked to participate in the Brickology exhibit at the McWane Science Center in downtown Birmingham, where some of his work is displayed as the only kid builder alongside that of local adult builders. The exhibit is going on now through the summer.

He made and sold 100 red heart necklaces for Valentine’s Day and is gearing up to start making ornaments, nutcrackers and gingerbread houses to sell this Christmas. His next goals are building the Lego treehouse and visiting the Legoland theme park in New York.

Recently, he finished his largest and most expensive Lego set yet, the Taj Mahal, which has about 5,000 pieces and took him about 20 days to complete. He saved up for it – the Taj Mahal retails for about $350 – and it now resides in a curio cabinet his grandparents bought and refinished for his work.

“My parents are his number-one fans,” says Julia. “They went all over Alabama looking for a curio it would fit in.”

Built by Xavier is a family business in which everyone plays a part: his grandparents handle shipping, Dad (Calvin) helps out with deliveries and Mom does everything else. “We call ourselves his unpaid interns,” Julia jokes. “Xavier just builds.”

He works on his Lego creations “all over the place” in their house, he says, but he’s always careful to pick up his pieces. Remarkably, with the thousands of plastic bricks her son has played with over the years, Julia says, “I’ve never stepped on a Lego.”