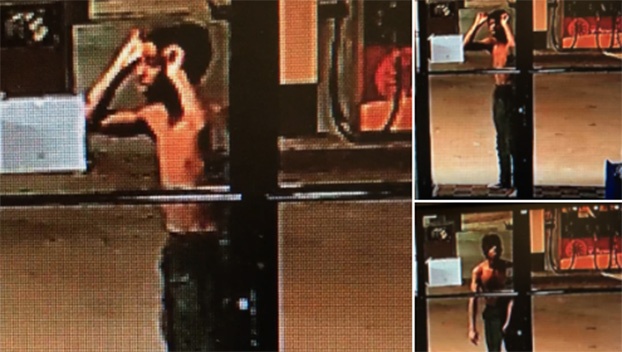 Police are trying to identify a shirtless man caught on camera burglarizing a Mississippi convenience store.

Responding officers discovered that a man unsuccessfully attempted to break the glass door with a large rock, then used a piece of rebar to break out a section of the front window, a post on social media reported.

The lone suspect was observed on video surveillance entering the store and stealing several small items from within, including tobacco and CBD products.

According to the post on social media, the suspect appears to be a black male, slender build, possibly 16-21 years of age, wearing dark pants, light shoes, no shirt, and a black skull cap.

“The suspect entered the building by crawling through a broken window, and may have cuts or pieces of glass in their back, chest or arms,” the post said.

Anyone who can identify the burglar or with information about the case, is asked to call Crime Stoppers at 601-355-TIPS (8477).