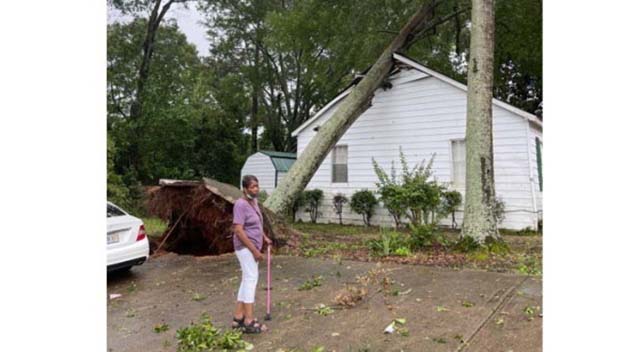 A home on Blount Ave. in Prentiss suffered damage after what officials believe was a tornado in Prentiss. The storm blew up with no warning and lasted roughly three minutes. Mary Taylor lives in the residence that was damaged when a tree fell on her house, but was not home when the storm blew through. Several trees were damaged in Taylor’s yard and shingles were also blown up on her roof. Pat Neal is Taylor’s neighbor and heard the tree fall.

🌪 Our survey team has confirmed 2 tornadoes from yesterday’s storms.

An EF-0 occurred in Simpson County, with peak winds of 80 mph.

Another EF-0 occurred in Jefferson Davis County, with peak winds of 85 mph. pic.twitter.com/GIlYUcNqDu

“It was the loudest noise I’ve ever heard,” said Neal. “I am just so blessed. We are all blessed.” Neal’s driveway was damaged by the uprooted tree.

Buddy Taylor and his dad were at his automotive shop on Second Street. “Me and dad thought we were going to die. We thought it was the end,” said Taylor. “I saw it spinning on the ground right in front of my shop, then just like that it was gone. That was too close for comfort for me.”

🌪 An additional EF-1 tornado was confirmed by our storm survey team. The tornado occurred yesterday in Clarke County and had an estimated peak wind of 90 mph. pic.twitter.com/9g5ZoG3yOV