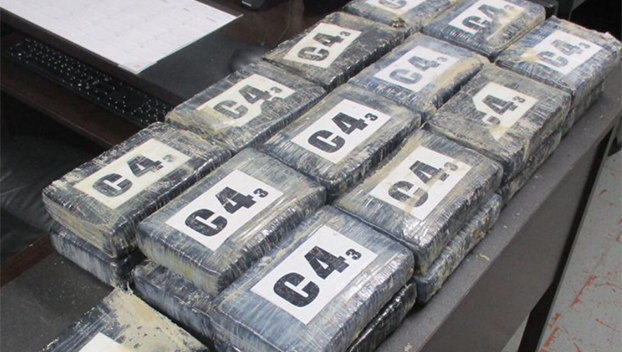 A Mississippi couple found a package similar to those found on Alabama beaches above. (Gulf Shores Police Department)

A couple walking along a Mississippi beach discovered a package washed up on the beach similar to the packages of cocaine recently found washed up on Alabama beaches.

WLOX News in Biloxi reports that Danny Truett and Brenda Knowles discovered the package Friday afternoon on the Pass Christian beach near the harbor. The package, wrapped up in tape, had similar markings to the packages found in Alabama.

Truett told WLOX  that officers came out to inspect the package after the couple called 911.

Packages of cocaine, including one decorated with a photograph of Colombian drug kingpin Pablo Escobar, are still washing up on Alabama beaches days after an initial haul of almost 70 pounds (31.75 kilograms) worth more than $1 million was found on the sand, police said.

One of the brick-like packages bore the image of what appeared to be a 1976 booking photo of Escobar, a notorious kingpin who was shot to death in Colombia in 1993.

Drug traffickers sometimes use boats and airplanes to cross the Gulf of Mexico, and a Gulf Shores police spokesman said officials usually get calls about once a year about smaller amounts of drugs being found on beaches. With few clues to go on, police rarely determine the origin of the drugs.