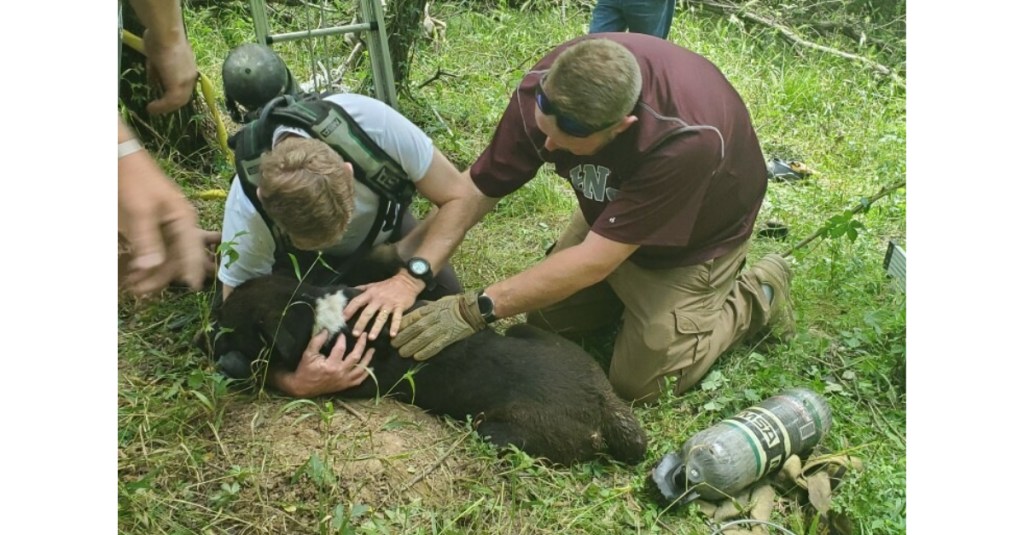 The scene could have been taken out of an episode of the popular television series “Lassie.”

Except this time it was a case of Timmy saving Lassie.

“A man living in the area heard the dog barking and howling and took a walk in the woods to find the dog,” Briggs said. “He found it had fallen in the cistern and he had no way to get it out, so he called 911.”

Briggs said authorities believe the 60-pound dog walked across the cistern’s cover, which collapsed, sending the animal about 15 feet down into the cistern.

A ladder was lowered into the cistern, and the firefighters — using air packs — removed debris from the bottom of the cistern and from around the dog, but had to come out of the confined space when they were affected by the heat and humidity.

Briggs said Pace was given instructions on using an air pack, and he went down and was able to put a harness around the dog, allowing the others to pull it up.

“He looked like a pit bull/Labrador mix,” Briggs said. “He was very friendly and glad to be out of that hole.”

The animal was taken to the Animal Medical Clinic for an examination. Pace said authorities are trying to find the owner.

“When I got the call, I called the Animal Clinic and told (veterinarian) Rachel Potter that we would be bringing the dog to her,” Briggs said. “It was examined, got some food and water, and is ready to go home, if the owner will come.”