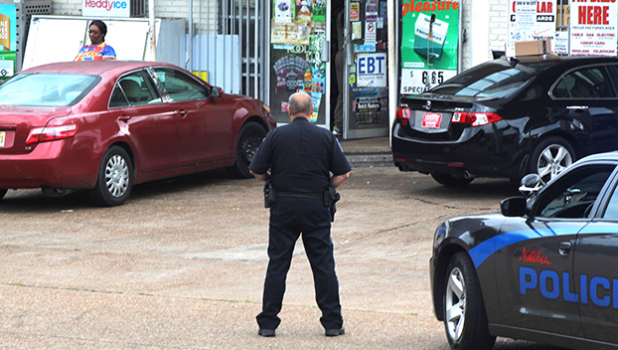 The Natchez Police Department arrested Xavier Marvel, who was charged with trafficking a Schedule I drug.

Police came in contact with Marvel in the parking lot, who was found to be in possession of 79 ecstasy tablets.

According to a news release from ACSO, officers were investigating a call about a subject with an assault rifle at 160 St. Catherine Street and the investigation yielded a 9 mm assault rifle and approximately 2 pounds of high-grade marijuana.

Officers then turned their attention to the Shop N Save gas station at 1 Aldridge St. A search warrant was executed at the store at approximately 3 p.m. Wednesday by officers of Natchez Police Department and Adams County Sheriff’s Office.

Officers also closed the Shop and Save store for code violations.

Over the years, law enforcement has received numerous complaints and tips about narcotics being sold illegally at the store, Adams County Sheriff Travis Patten stated in the news release.

“Today that information paid off,” he said. “We hope that these efforts are not in vain and that our citizens demand more from those who serve our community. ACSO and NPD worked hand in hand on this operation. Imagine what can happen if we can get our entire community on board with information sharing on crimes like this and others. We could increase the quality of life for everyone.”

Natchez Mayor Dan Gibson said it was awesome for Natchez and that a lot of undercover investigative work went into the raid. The mayor and law enforcement had a meeting about the raid Tuesday, he said.