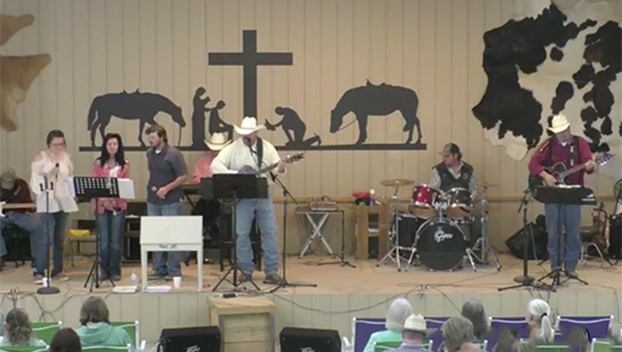 “You can’t be Christian and cowboy at the same time.”

“I grew up in the trail ride community,” he said. “That lifestyle is pretty rough-and-tumble. It’s pretty much ‘whiskey, women, and stupid.’ It’s not an atmosphere that’s conducive to the gospel.”

Now a competitive team roper as well as a pastor, the 47-year-old Moody said he grew up with one boot in cowboy culture and the other in church culture.

“On the weekends, it was a split family,” he said. “One weekend, I’d go with my mother to the Primitive Baptist church, and the next, I’d hang out with my dad, who was a calf roper and bull rider who’d drink half-a-case of beer a day.”

“The cowboy church movement was blowing up in Texas,” he said. “Chad and I both felt the Lord was leading us to start something like that here. We had our first meeting on the tailgate of a truck at the Pontotoc County Fairgrounds in June of 2011.”

With Moody as its preacher and Sartin as its worship leader, Hayseed’s first official worship service was in a less-than-ideal location.

“We had our first worship service in a dog pen,” he said with a laugh. “Chad would get up and catch the dogs and put them in coops so we wouldn’t hear them bark. We’d set up hay bales in a corner of the pen, and that was our stage. We had about 25 people that first week.”

The group grew as it moved – first into a barn, then a wedding tent, then a cattle sale barn – before settling into its current home, complete with outdoor riding arena, just off Highway 6 in Thaxton. Moody said Hayseed’s 200-plus members are a mix of actual horsemen and those who just like cowboy culture.

“The cowboy church movement started in Texas as an outreach to working cowboys,” he said. “We just don’t have those here. But we have a lot of trail riders, barrel racers, and team ropers. At this point, about 50% or less of our congregation have horses. We call them ‘people with a Western persuasion.’”

Cowboy attire is considered de rigueur at Hayseed, and Moody said many first-time attendees really “pull out all the stops.”

‘They’ll go to Moore’s or Scruggs and buy a new hat,” he said. “Because we live in the South, they think you have to wear your best to church, so you go get your new ‘cowboy best.’ Pretty soon you learn you can wear your working cowboy clothes to church.”

Moody said he always wears his cowboy hat when he preaches, because he wants those in attendance to feel welcomed and at ease.

“It’s the same Jesus, just different clothes,” he said. “We wear hats, but we take them off when we pray, to be reverent. We try to reach out and make people feel comfortable. Our goal is to remove barriers that keep people from church.”

Since no self-respecting cowboy gathering would be complete without a “chuck wagon,” Moody said Hayseed serves a full breakfast at its weekly roundup.

“We meet early,” he said. “So we feed a full breakfast; usually biscuits or pancakes, sausage, gravy and eggs. We’ve got it down now to where we can knock out a full breakfast for 200 in about an hour-and-a-half.”

Connecting with the unchurched is part of Hayseed’s DNA, so the church stays busy with outreach events. Hayseed just hosted a youth rodeo, and the congregation is gearing up for its God and Country Rodeo on July 3, where they anticipate as many as 1,000 attendees.

Moody said the event, complete with fireworks and free watermelons, is an outgrowth of the church’s governing philosophy.

“We’re a seed-sowing church,” he said. “That’s where our name comes from. Wherever you set down a bale of hay, grass grows. That’s our lives; wherever we go we’re sowing seeds. We do these events to get people into church, and we leave the rest to Jesus.”

Moody said the work of Hayseed is to correct the misconception he grew up with: that you can’t be cowboy and Christian at the same time.

“We try to keep Jesus at the center of everything we do,” he said. “But we tell people, ‘Just because you know Jesus doesn’t mean you’re soft.’”