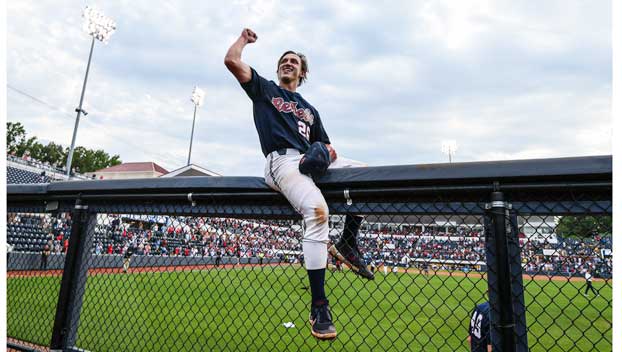 Ole Miss pitcher Doug Nikhazy sits on the fence of the right field bullpen to celebrate with the fans in right field following their 12-9 win over Southern Mississippi in the NCAA Oxford Regional championship at Oxford-University Stadium on Monday, June 7, 2021. (Bruce Newman)

For a second-straight season, the Ole Miss baseball team finds themselves two wins away from Omaha and the College World Series.

Tim Elko continued to cement his legacy at Ole Miss on Sunday. The designated hitter doubled his grand slam total with one in the second inning. Elko added another home run in the fourth inning as part of a 3-for-3 game with 5 runs batted in.

The Ole Miss captain finished with three home runs and 10 RBIs over the weekend, earning him the Most Outstanding Player in the Oxford Regional.

“It’s always my goal to do whatever I can to help us win,” Elko said. “I think that anytime we’ve faced adversity, had our backs against the wall and anything of that sort, we bounce back and won games and played really well. Some may say we play our best baseball then, which I think is a good trait. The team’s got a lot of fight. Probably the most fight I’ve ever seen in a team. The stuff we’ve had to go through this year is unreal and I wouldn’t wish it on any other team but I think that we’ve handled it better than anyone could imagine.”

The Rebels jumped out to a 9-0 lead after the first two innings, scoring four in the first and five more in the second after the lengthy delay. Southern Mississippi answered with two runs in the third and five runs in the fifth to make 10-7 Ole Miss lead at the time.

Never trailing, the Rebels responded in the bottom of the fifth with a two-run home run by Calvin Harris which was enough as the Golden Eagles tacked on two more runs in the seventh for the final margin.

Ole Miss and Southern Mississippi combined for 11 home runs and each had 11 hits.

Freshman Jack Dougherty got the start and worked four innings but went nearly an hour between pitches with the delay coming after the top of the second inning.

While the legend of Elko is growing at the plate, the legend of Doug Nikhazy continued to grow on the mound. After throwing 119 pitches against Florida State on Saturday, Nikhazy entered the game in the sixth inning on Monday and worked 1.1 innings.

Nikhazy gave up two runs, but earned his second win in less than 48 hours and provided key outs to help the Rebels keep their season alive.

Bianco spoke with all his pitchers following Sunday’s loss and told them to all be ready to be called upon. When he got home, Bianco received a text from Nikhazy regarding his availability for Monday.

After a season filled with key injuries and setbacks, Ole Miss put themselves in a position to reach the College World Series for the first time since 2014. The Rebels travel to No. 5 National Arizona for a Super Regional in Tucson this weekend, which will either start on Friday or Saturday.