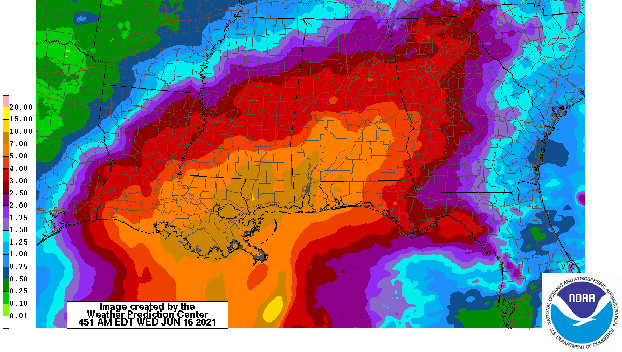 Heavy rains could soon be in store of parts of Louisiana, Mississippi and Alabama as a tropical system off the coast of Mexico begins moving north ahead of the weekend.

A tropical disturbance is expected to move northward and bring heavy rainfall into portions of the Gulf Coast and Southeast Friday into the weekend. While heavy rainfall appears likely, uncertainty remains with the exact magnitudes and location of highest totals. pic.twitter.com/PbWDu2JTLx

The system could bring rainfall totals of up to 5 inches (13 centimeters), with higher amounts possible in some areas, according to the National Weather Service in Lake Charles, Louisiana.

Rain totals could be even higher in south Mississippi, where forecasters say up to 10 inches (25 centimeters) could fall in the Gulfport and Biloxi area.

How much the system develops before it reaches the Gulf Coast was unknown on Thursday, but forecasters say it will have the potential to drop torrential amounts of rain on the region.

“Regardless of development, this system is expected to bring the threat of very heavy rainfall, flash flooding and strong winds to southeast Louisiana and south Mississippi by late in the week into the weekend,” according to the National Weather Service in the New Orleans area. “Tidal rises of 1 to 3 feet may also cause areas outside levees to experience coastal flooding issues starting Friday and lingering through the weekend.