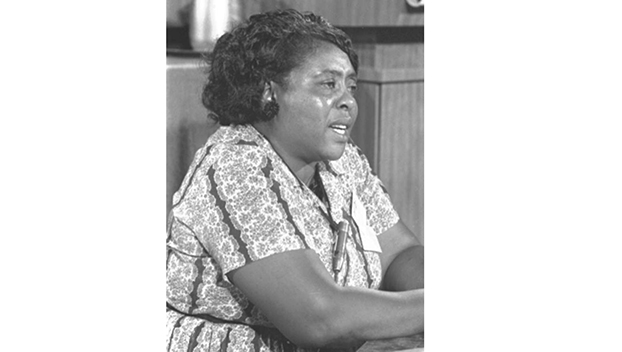 As the youngest daughter of civil rights activist Fannie Lou Hamer, Jacqueline Hamer Flakes grew up intimately aware of prejudice and how much her mother struggled against it.

“I just want people to take this at heart and understand what my mother fought for,” Flakes said. “It wasn’t her plan to go out and be a civil rights activist or a human rights activist, but it was God’s plan, so I’m just glad that she followed through with it.”

While Fannie Lou Hamer is remembered as one of Mississippi’s most prolific civil rights and voting rights activists, Flakes, 54, remembers her first and foremost as her mother.

Hamer and her husband, Perry “Pap” Hamer, raised four adopted daughters, including Flakes’ biological mother, Dorothy Jean, who died while Flakes was only six months old, and Flakes herself.

Although biologically Flakes’ great aunt, Hamer raised her adopted children as her own. While Flakes has often wondered what life would have been like to live in her biological father’s house, she cherished her time with her adoptive parents.

By the time Flakes was born in 1966, Fannie Lou Hamer was already four years into her work with the Civil Rights Movement. Hamer and her husband, Pap, were sharecroppers on the W.D. Marlow Plantation outside Ruleville. In 1962, Hamer attended an event hosted by the Student Nonviolent Coordinating Committee (SNCC) at William Chapel Missionary Baptist Church, where she learned information she never knew about Black rights, particularly the right to vote.

After that meeting, Hamer decided she wanted to be part of the movement. She came home to share the information with her family, Flakes said.

Hamer became one of the front-runners for voter registration drives in the Mississippi Delta, but was mistreated for her efforts. For attempting to register herself and 17 others to vote, she was met with slurs at the courthouse in Indianola and kicked off her plantation while her husband stayed until the end of harvest. She was forced to move around several times in her lifetime, just to avoid violence. Once, her house was shot more than 16 times by racists. When she and other SNCC workers held a voter registration conference in South Carolina in 1963, they were arrested and taken to Winona jail, where she was beaten.

“Even after she was sent out of state to heal, it took three months for her to return,” Flakes said of her mother. “But when she came back, she was stronger than ever, and she never stopped moving, and never stopped with the civil rights activism. She kept going, and I just want people to know that we can all do the same thing because that’s what we need right now.”

Hamer continued travelling across the state to speak about voting, and in 1964, she helped found the Mississippi Freedom Democratic Party to challenge the state’s all-white delegation at the Democratic National Convention that year.

Through it all, Hamer lived by faith.

“She loved the word of God, and she knew the Bible, and no matter what was going on, she never showed fear, never showed fear, and I loved that about her,” Flakes said. “She would stand up strong, have her hands on her hips and say she was going to tell it like it is, and that’s what she did.”

Much of Hamer’s activism focused on economic power for African Americans. She started the Freedom Farm, as part of the Freedom Farm Collective, where she purchased land in Sunflower County in an attempt to give poor people a chance to own land on which they worked. While it ended in 1975, its impact continues, Flakes said.

“It’s like three blocks of families that she helped to either get the house built or to get the loans or the grants or the cash that they needed to get the lots or to pay down on the homes to get them built,” Flakes said. “I’m just so proud of just hearing today how the people in Ruleville or in the Delta just talk about my mom and how she helped them.”

In March 1977, Fannie Lou Hamer died while battling complications with hypertension and breast cancer. She was 59 years old.

Flakes was 10 when her mother died, and she felt the loss in her soul.

“I was her baby,” Flakes said. “As the cancer spread in her body, she would call me in the room. They called me Cookie. She’d say, ‘Cookie, come on in here and lay down with Mama, I’m cold,’ and she would just want me near her all the time.”

After her mother’s death, Flakes realized that though Hamer left a legacy that inspired many to start scholarship foundations in her name, she and her sister still struggled to make ends meet.

“It was hurtful knowing that people have started the foundations, but Fannie Lou’s children, the two daughters that she adopted and was raising as her own, struggled to get through school because we didn’t have anybody helping us with books or anything, anything. No one offered anything,” Flakes said.

As she struggles to recover from her own battle with cancer, Flakes plans to follow in her mother’s footsteps to make Ruleville and the Delta a better place.

One area she wants to see change is seeing political power shift in Ruleville. She still believes that disparities exist between how money is invested in African American buildings. With much of the older generation now deceased, Flakes worries that her mother’s legacy, and all that she fought for, might be forgotten.

For Flakes, continuing down the same trails blazed by her mother is the most fitting way to honor the work that did and all she accomplished.

“I’m the last daughter of Fannie Lou Hamer that is living at this time,” Flakes said. “I vowed that I’m going to continue my mother’s legacy.”