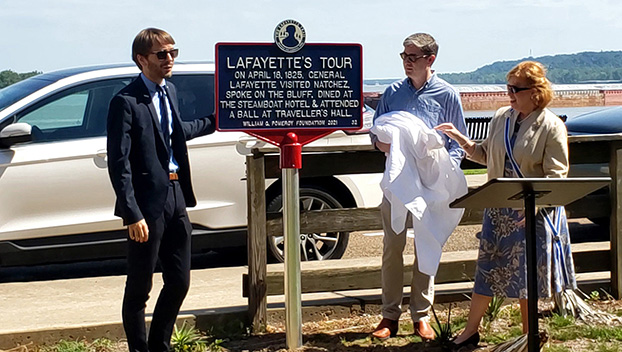 A city in Mississippi is now part of a trail commemorating what was then a nationwide tour by a French general who had participated in both the American and French revolutions.

The Marquis de Lafayette visited Natchez on April 18, 1825, during the second and final year of a tour made at the invitation of President James Monroe and the U.S. Congress.

During those two years, Lafayette stopped at 320 cities and towns in the 24 states then in the union, Lafayette Trail founder James Icher said.

The Virginia itinerary included cities in what is now West Virginia, he said.

He said he hopes eventually to have 175 markers, including one at Le Havre, the port where Lafayette left from and returned to France. About 40 markers have been approved since the project started in 2017, with about 25 installed in 13 states so far, he said in a phone interview Wednesday with The Associated Press.

A marker describing Lafayette’s stay in Natchez was unveiled Wednesday at a lot overlooking the Mississippi River, The Natchez Democrat reported.

The Historic Natchez Foundation and the Daughters of the American Revolution worked with The Lafayette Trail Inc. on the project. Two families offered the property, foundation executive director Carter Burns said.

When Lafayette made his tour, the 50th anniversary of the American Revolution’s end was nearing. Lafayette, who had been 19 when he first came to America, was “the last surviving general of the Continental Army,” Icher said.

“He epitomized the American Revolution and people received him as a hero,” Icher told the newspaper.

Icher, originally from Carcassonne, France, said he came to the U.S. in 2015 as an exchange student at the College of William and Mary in Virginia and became fascinated by the fervor with which Lafayette is remembered in this country.

In France, he said, Lafayette, who headed the French National Guard during the French Revolution, has detractors as well as fans.

“Lafayette never fully embraced the goals of the French Revolution,” he said. Rather, he said, Lafayette believed that France should adopt a constitutional monarchy with greater rights for citizens.

Natchez is the only Mississippi city that Lafayette visited, Icher said.

While he was traveling, the U.S. endured a divisive election — the U.S. House chose the winner in 1825 because none of the candidates got an electoral majority in 1824.

“The country survives this election, demonstrates the resilience of its institutions and uses Lafayette to express that and send a message to Europe that the United States is an independent nation. The American experiment is working and it is here to stay,” Icher said.