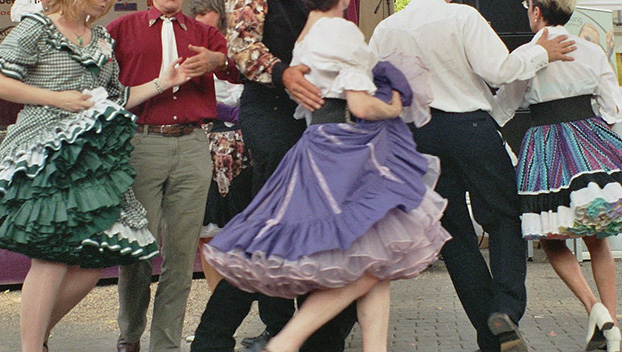 Beware of square dancers and cloggers this week in Mississippi’s capital city.

The world’s largest square dance event is coming and will be bringing nearly 2,000 visitors from 46 states.

And they will be showing up in some of Jackson’s most popular area to participate in several flash mobs to the surprise of unsuspecting residents.

The National Square Dance Convention will celebrate its 70th anniversary in the City of Jackson from Wednesday, June 23 through Saturday, June 26 at the Jackson Convention Center.

The organization is inviting residents across Jackson to celebrate.

“We are excited to come to Jackson, Mississippi to celebrate our 70th anniversary, and we hope to get everyone in the region dancing with us,” said Don and Glinda Torvik, General Chairpersons, NSDC. “We hope to create some new square dance dancers while we’re in Jackson.”

“Visit Jackson is excited that The National Square Dance Convention delegation has made their way to Mississippi’s Capital City,” said Rickey Thigpen, President/CEO, Visit Jackson. “This week of activities marks the culmination of multiple years of work by our sales and services team, earning the trust and fortifying relationship with the organization’s leadership. Now it is time to execute on the promise and Jackson, Mississippi … The City With Soul is ready. This event serves as an example of the citywide conferences and meetings that Visit Jackson has set its sights on to maximize tourism’s impact on our community.

First-time dancers are invited to learn from the professionals and participate in the largest square dance convention in the world at the Jackson Convention Center Complex on Saturday, June 26 from 2 p.m. until 4 p.m. in Room 201. Admission is $10 and registration will be available at the entrance on Saturday, June 26.  Dancers are encouraged to wear comfortable attire as they will participate in lessons from Patty Greene (squares), Jeanette Bowen (lines), and Jeffrey Smith (contras).

The National Square Dance Conventioneers will also take their skills across the City of Jackson for a series of flash mobs on Saturday, June 26 from 9 a.m. until 1 p.m. with stops at the Farmer’s Market, Highland Village, Fondren District, and the Jackson Zoo.

There will also be a clogging competition at the Hilton Garden Inn’s main ballroom on Saturday, June 26 at 9 a.m.

Jackson residents interested in attending all sessions may register online at 70nsdc.com for $75 and experience the National Square Dance Convention.

The National Square Dance Convention will honor military, first responders, and frontline medical personnel who supported the COVID-19 pandemic at the convention with a traveling Wall of Honor display. The organization is asking for photos of family members in uniform to add to the display. More information is available at www.70nsdc.com

The National Square Dance Convention® is an annual event occurring in late June each year moving from city to city based upon a bid process presented at the annual convention and awarded four years in the future. The convention presents an extensive program of education through panels, seminars, and workshops. But, the convention includes all phases of dancing, exhibitions, a fashion show, bid session, special events, and many shopping opportunities at the Vendors. Most of all the convention provides fun and fellowship to dancers and leaders from around the world. This Convention is a one-of-a-kind event that has been held annually for the past 70 years.