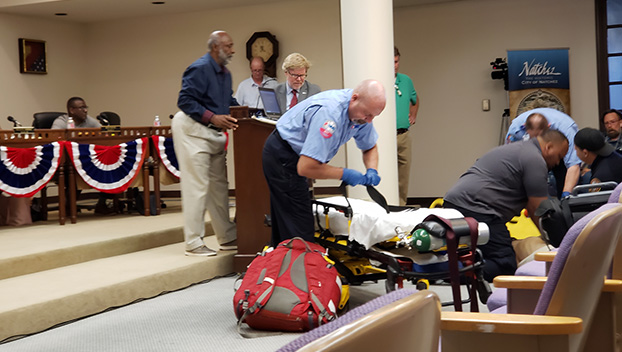 A concerned citizen suddenly collapsed and died while making a presentation to city leaders in a meeting in the Natchez City Council Chambers.

The special called meeting of city leaders ended in prayer Wednesday night as the fire chief who was in attendance performed CPR on the man until an ambulance arrived on the scene. The man was unresponsive when paramedics arrived.

Officials who knew the man said he was more than 70 years of age, however, no other medical history was known. The man was addressing city leaders about blighted properties in his neighborhood.

Natchez Mayor Dan Gibson adjourned the meeting early after officials prayed for the man before he died.

“Due to a medical emergency affecting an individual in attendance at tonight’s BOA meeting, the meeting has been adjourned and will be rescheduled at a later date,” Gibson said in a written statement. “Our prayers are with the individual and their family.”

Gibson said authorities were still trying to contact family members and therefore have not released the man’s name.

Before the incident, Aldermen unanimously approved minutes of prior meetings. No other actions were taken. Gibson said the meeting may be rescheduled for Monday.