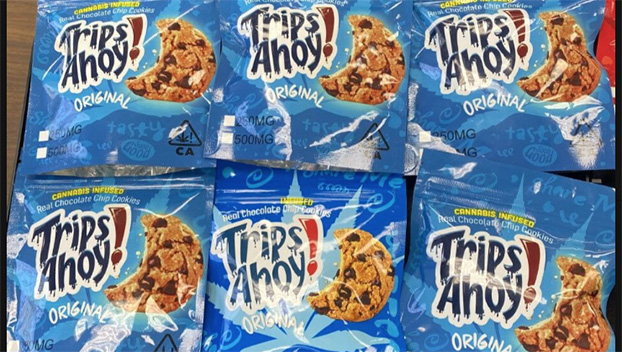 Alabama police are alerting parents after a drug bust turned up marijuana and edibles packaged to resemble real cookies and candy.

Dominic C. Davis was placed into custody and charged with possession of a controlled substance, first-degree marijuana possession and use/possession of drug paraphernalia.

Mobile Police announced the arrest and discovery of the packaged drugs on social media Thursday.

“Investigators seized firearms, marijuana, bulletproof vests, several thousand rounds of ammunition, edibles with THC and CBD, and THC vape cartridges during the search warrant. In addition, they seized candy and cookies that look very similar to regular ‘skittles’, ‘sour patch crawlers’, and ‘chips ahoy’ type products,” the post said.  “We are urging our parents to take extra precaution and inspect their kid’s candy and cookie products.”

The drugs were packaged under names like “Trips Ahoy” and “Medicated Jolly Rancher Gummies.” Others looked nearly identical to a gummy worm brand.