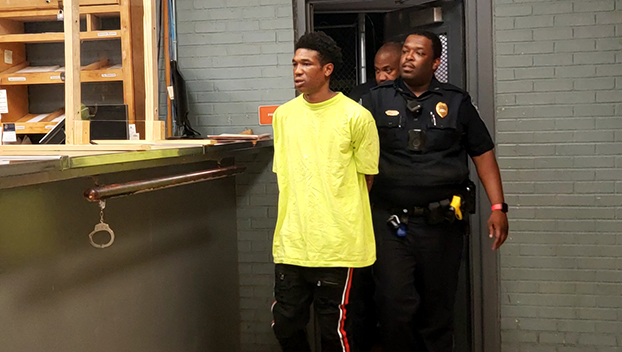 Mississippi police arrested a man for kidnapping his girlfriend at gunpoint after an extensive 4-hour search involving multiple agencies Monday.

Natchez Police Chief Joseph Daughtry said police responded to a call at approximately 5 p.m. Monday about the kidnapping of 21-year-old Cateria Brown by her boyfriend Michael Thomas, who is approximately 25 years old.

Brown appeared to be uninjured after the incident.

Thomas, an aspiring rap artist, is commonly referred to by the names “Traedoe” or “Bang,” law officials said.

He was recently released from a five-year sentence in the Mississippi Department of Corrections after he pleaded guilty to an aggravated assault charge.

He was arrested at approximately 9 p.m. Monday in the 100 block of Highland Oaks Drive. Daughtry said Thomas would be charged with aggravated domestic kidnapping and carjacking.

Police responded to a call at approximately 5 p.m. at 601 Old Washington Road, where Thomas allegedly got into an altercation with Brown that escalated to a degree where he pulled a gun, put it to her head and drove away in her father’s vehicle against her will, Daughtry said.

Daughtry said witnesses also saw Thomas’s family members attempting to stop him and he threatened them with the weapon as well.

“We had numerous witnesses call for help for fear for this young lady’s life,” he said. “We contacted the Adams County Sheriff’s Office and Mississippi Highway Patrol and we were able to start setting up a parameter. … We even put drones in the air to try and find where this individual could be. Our main concern was this young lady’s safety. … I understand people get into arguments but when it escalates to him putting a gun to her head it becomes a very dangerous situation.”

Off-duty officers showed up to assist with the search and agencies as far away as Hattiesburg were on the lookout for Thomas, law officials said.

Daughtry thanked the other agencies for the role they played in helping get Thomas into custody and Thomas’s family for their cooperation.

“We’re working together and the criminal element — they have a reason to be concerned because we’re not going to stop until we get who we need in jail.”

Adams County Sheriff Travis Patten said he is prayerful that the judicial system will do its part to bring justice to this incident.

In the past, friends and family have shown up for Thomas’s court proceedings wearing “free Traedoe” T-shirts.

“We have a history of things happening going down the road and we don’t need that happening. We need everyone to do their part. If we go out here and risk our lives every day to take the bad guys off the street, we need the public to back us when we get to court,” Patten said.