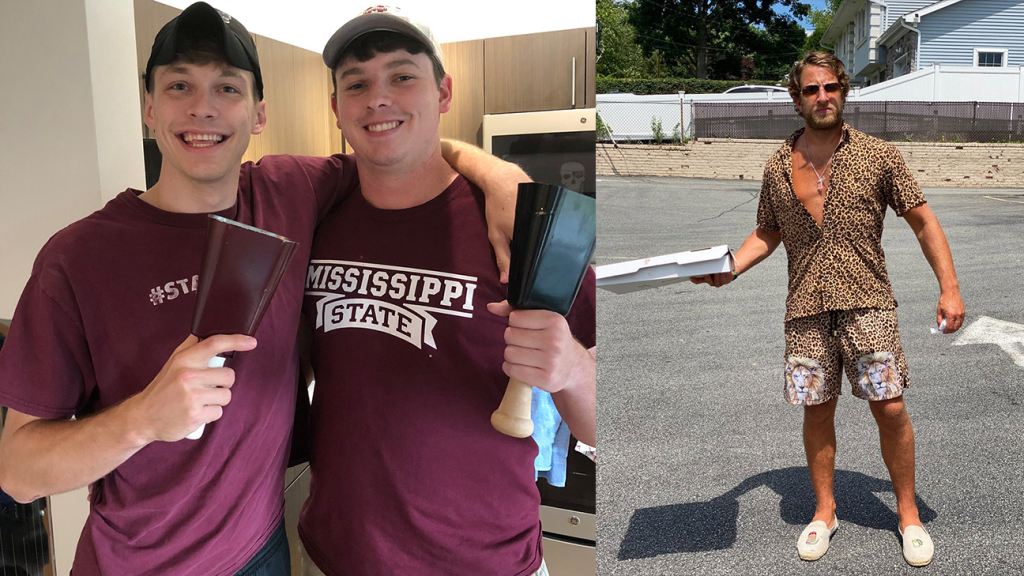 Photos from Twitter Brady Kruse, left, and Colton Watson couldn’t stop grinning Monday when they found out that Barstool Sports founder Dave Portnoy would buy their tickets to see MSU play Vanderbilt in the College World Series. At right, David Portnoy, AKA “El Presidente,” is a multi-millionaire known for his large online presence, philanthropy, pizza reviews, gambling content, stock-market activity and summering in Miami and the Hamptons.

Colton Watson wasn’t trying to get 15-minutes of internet fame. He just wanted to buy tickets to see his beloved Mississippi State Bulldogs play in game one of the College World Series championship against Vanderbilt Monday night in Omaha.

That’s what happened — Watson and his best friend Brady Kruse got the tickets they desired — but the road to those seats captivated the internet and garnered the pair thousands of views, likes, retweets and impressions on social media throughout Monday.

Their desperate pleas even got the notice of a multi-millionaire who helped them find their way to some of the best seats in the park.

Sunday at 6 p.m., Watson and Kruse set up a couple of chairs at the box-office outside TD Ameritrade Park.

The pair had been in Omaha all week, watching MSU’s magical run through the College World Series.

They’d seen the dominating win over Texas in the opener and the comeback victory over Virginia that kept the Bulldogs and coach Chris Lemonis in the driver’s seat of their side of the bracket.

They rode out the rain delay and hot Texas bats that handed MSU their first loss of the tournament late Friday night.

When Tanner Leggett hit a walk-off single Saturday to send Mississippi State to the title series, Watson and Cruz were there in the stands.

“I didn’t start screaming and jumping around until Brayland Skinner crossed the plate for the winning run,” said Watson. “I wanted to make sure that his foot hit the plate and then I was ready to celebrate. We soaked up the win for about 15 minutes and then we started thinking about how we’d get tickets for the next game.”

The city of Omaha had already been awash in maroon and white throughout the week, but once Leggett’s game-winner touched down Saturday night, that took things to another level.

Suddenly, over 800 miles to the south, thousands more MSU fans made the decision to pack their bags, load their cars and rush north in order to see their Bulldogs play in person for a national championship.

That made the price of tickets leap into a stratosphere that Watson and Kruse didn’t want to reach.

“As soon as they started posting tickets for sale on Ticketmaster and the other apps you can use, they were going for $150 and then it just went up from there,” said Watson. “We’d had really good luck all week buying our tickets for face value at the ticket office and that seemed like the most logical plan. We were from someone at the ticket office that they’d have seats for sale in every section when the window opened Monday at 10 a.m.”

The duo wanted to be first in line and Watson started tweeting through the wait using his @colton8swatson handle.

A graduate of Brookhaven Academy and the son of Dr. Bob and Dr. Diane Watson, Colton has been wrapped in mar0on since birth. He graduated from the school in May with a B.S. Degree in Chemistry and is now pursuing a Master of Science in Food Science, Nutrition and Health Promotion.

One of his first tweets on the thread was offering to buy more tickets for those that still might be looking like himself. He only wanted to resell them at face value so more fans like him could get in without needing to sell a kidney.

Watson had to quickly shut down that plan though as his inbox was overfilled with people requesting that he buy them tickets.

Watson and Kruse dealt with stadium security that made them move across the street, boredom, hunger, sore bodies and even a group of Ole Miss fans that came by to heckle them.

“Around midnight Brady had gone for a walk and at that point we’d been joined by a couple guys that stuck it out with us the whole time named Austin and Tyler,” said Watson. “Some girls walked past us a couple times and kind of scoffed at us for waiting for tickets like we were dumb before hitting us with a Hotty Toddy.”

They even battled doubt as people told them that they were sitting and waiting for tickets that didn’t exist.

Watson kept a cheerful disposition though and didn’t let the naysayers get to him as he watched more and more State fans joined the queue behind him.

Surely, they wouldn’t turn all these people away, he thought.

That’s exactly what happened though as a security guard came out around 9 a.m. and let Watson, Kruse and their fellow Bulldog faithful know that no tickets would be sold there for the upcoming 6 p.m. first pitch.

If you wanted to get into the stadium, you’d have to pay after-market prices and purchase tickets online.

Watson’s final post about getting turned away had 43 replies, 42 retweets and 347 likes at last check on Twitter. All not too bad numbers for Watson and his 662 followers on the app.

What he didn’t know is that someone with a much bigger following online had been made aware of his plight.

David Portnoy founded Barstool Sports as a free newspaper focused on gambling out of his parent’s Boston area basement. He’s built that brand — brick-by-brick — into a website and multimedia company that’s valued today at nearly half a billion dollars.

Known as “El Presidente” by fans of Barstool and @stoolpresidente on twitter, he has a following on the app of 2.6 million.

Portnoy is no stranger to Mississippi State or it’s fan base though. Two years ago, he hired Brandon Walker, a one-time MSU beat-writer to come work for the company at its New York City office.

At the top of the retweet he wrote, “I got you. Dm me. I’ll buy you tickets.”

The offer stood as everyone watching online waited for a reply from the ticket seekers.

And those watching waited and waited. And waited some more.

Watson and Kruse were asleep, not realizing that a multi-millionaire had sent a simple “hey” message into their DMs as he lounged by his pool in the Hamptons.

An hour after Portnoy made the offer, Watson was woken up by someone banging on the door of where he was staying.

“My friend Ruby didn’t even know where we were,” said Watson. “She’d just come to town for the final series. She rode a scooter in the rain and found us by tracking down my location. She said, ‘Wake up, the CEO of Barstool Sports wants to buy you tickets.’ I had 16 missed calls, 40 missed texts and more unopened direct messages on Twitter than I want to count. A lot of them were strangers telling me to wake up and respond to Portnoy.”

Portnoy created The Barstool Fund during the pandemic in order to donate to struggling small business and restaurants affected by COVID-19 losses.

Started with a $500,000 donation from Portnoy, the fund grew to over 41 million dollars and has seen funds dispersed to over 400 businesses thus far.

“I think he’s the type that’s more about actions than just words,’ said Watson. “I’d know about his company and knew about what he’d done with the Barstool Fund. I was shocked at his offer, but also wasn’t really surprised that he’d be willing to do that.”

Watson’s friend Ruby had also posted his Venmo handle online and Watson had fellow MSU fans and strangers sending him money to buy his own tickets.

“I kind of thought once we went to take a nap that I’d wake up with people trying to buy tickets for me,” said Watson. “We’d already been on the news back in Mississippi, but I didn’t want that. I didn’t want regular people like us to pay $100 or more dollars over face value for tickets that should have been sold at the box office to the general public.”

Portnoy bought tickets for Watson, Kruse and two more friends that were part of the trip but couldn’t wait in line due to other school related obligations.

“He put us in the second row of the third baseline,” said Watson. “They were the best seats we had all week.”

Watson and Kruse have donated any donations they received to AllPlay Omaha, a non-profit league that’s affiliate with the Miracle Baseball League.

In an age where so many will aim for clout or internet notoriety by trying to make themselves go viral, Watson can honestly say he had had no idea he’d have so many eyes on his Twitter feed.

“I was just trying to get into the game without paying too much and thought I’d document how that went for us,” said Watson. “My mom and dad kept up with it a little — my sister has been pretty jealous as well. They told me despite how cool this was, don’t let anything go to my head. Their message was to stay humble and be a nice guy to everyone that wanted to talk about it. And I feel like I’ve done that, I know it’s just a little bit of fleeting internet notoriety, but it was really cool to see how it all turned out.”