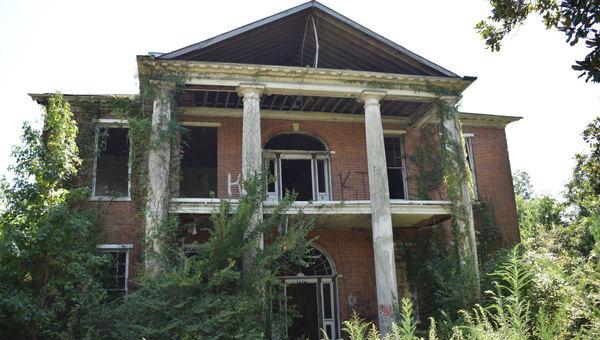 Nineteen years after a fire nearly destroyed one of Mississippi’s historic antebellum mansions — Arlington — Natchez leaders have decided to take legal action agains the owner of the property.

The house, which is owned by by Dr. Thomas Vaughan, was among the list of 26 blighted properties Natchez Mayor Dan Gibson and the Board of Aldermen voted on Monday.

The list was compiled after a meeting earlier in June when a Natchez  resident Lee Nelson collapsed and died while addressing the city about blighted properties in his neighborhood, Natchez Mayor Dan Gibson said.

Laws in the State of Mississippi allows municipalities to file civil charges against property owners who let their properties fall into disrepair, officials said.

“It is not fair to any of our citizens for property owners to allow their properties to fall into such state of disrepair without consequence,” Gibson said. “We’ve already adjudicated these properties to no avail. … Anyone who causes undue stress and concern to their neighbors — this would send a message to them that that type of activity will not be tolerated.”

Natchez City Attorney Bryan Callaway said he spoke with Attorney Tim Cotton who would be willing take on the cases and present them to Justice Court. If the city wins the civil suits, tax liens would be applied to the attorney fees at the time they are collected, he said.

Monday’s actions are just the next step in a nearly decades-long effort to save the federal-style, suburban villa built in 1818. In that time the structure still sits unmaintained with grass and brush growing around the abandoned building, which sits vacant with broken windows and graffiti scrawled on it.

In 2019, Natchez officials completed a process called demolition by neglect against the owner of Arlington in January and some eight months later no further progress has been made on the property, officials said.

In a 2019 article in The Natchez Democrat, City Planner Riccardo Giani said the property’s owner, Tom Vaughan of Jackson, has been unresponsive.

The demolition by neglect process is outlined in a step-by-step city ordinance that culminates with officials being able to fine or impose a tax lien on a property owner if the owner fails to maintain the property.

After a fire destroyed the original roof on the house in September 2002, the Historic Natchez Foundation worked to add a new roof to prevent the house from falling to the ground completely.

MiMi Miller, former director of the Historic Natchez Foundation said she remains hopeful that Arlington can be saved.

“I never give up hope that something will help us be able to preserve Arlington,” Miller said in 2019.

On Monday, the board passed a motion to pursue the lawsuits against property owners by a vote of 5-0. Alderwoman Sarah Carter-Smith was absent from Monday’s meeting. The board also passed a resolution instructing Adams County Tax Collector Terrence Bailey to collect all tax liens or sell properties where taxes have not been collected by a vote of 5-0.