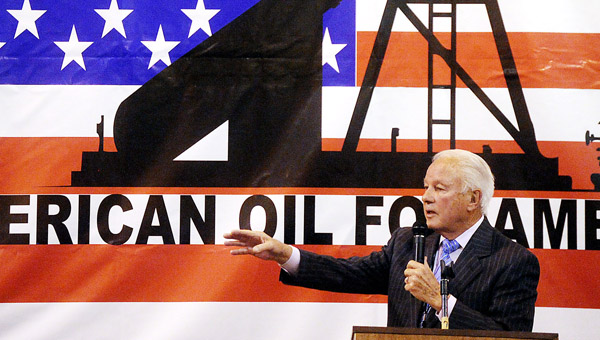 Edwin Washington Edwards, the high-living, quick-witted four-term governor who reshaped Louisiana’s oil revenues and dominated the state’s politics for decades, a run all but overshadowed by scandal and eight years in federal prison, died Monday. He was 93.

Edwards died of respiratory problems with family and friends by his bedside, family spokesman Leo Honeycutt said, days after entering hospice care at his home in Gonzales, near the Louisiana capital.

“I have lived a good life, had better breaks than most, had some bad breaks, too, but that’s all part of it. I tried to help as many people as I could and I hope I did that, and I hope, if I did, that they will help others, too. I love Louisiana and I always will,” Edwards said in some of his last words, according to Honeycutt’s statement.

Earlier in the week, the former governor also said, “I’ve made no bones that I have considered myself on borrowed time for 20 years and we each know that all this fun has to end at some point.” For him, that time was shortly after daybreak this morning, the statement said.

Edwards, the “Cajun King,” was known for delivering a steady supply of memorable one-liners as well as for his deft political instincts. Infamously, the lifelong Democrat said once said that the only way he could lose a race against a particularly lackluster Republican was if he were “caught in bed with a dead girl or a live boy.”

A native of Louisiana’s Acadiana region who swore his 1972 oath of office in French and English, Edwards enjoyed renewed popularity after emerging from prison in 2011 at age 83. His flamboyant character intact, he found a third wife in Trina Grimes, then 32. They met when she began visiting him in prison after they struck up a pen-pal relationship.

“I would have walked into prison a happy man had I known how it was going to end,” he said at his lavish 90th birthday bash in August 2017.

They had a son, Eli, in 2013 — Edwards’ fifth child — and starred in a short-lived reality TV show, “The Governor’s Wife.” He also attempted one more political comeback, losing a runoff to a Republican in a south Louisiana congressional race in 2014.

The federal case that led to his May 2000 conviction involved state riverboat casino licenses awarded during and after his fourth and final term in the 1990s. Edwards maintained the case was built on misinterpreted, secretly taped conversations and the lies of former cronies who made deals to avoid jail.

Silver-haired, handsome and gifted with a dry sense of humor and easy charm, Edwards dominated Louisiana politics in the late 20th century much as Huey P. Long had dominated its earlier years. They shared a populist appeal to the state’s downtrodden, and political fortunes that flowed in part from taxes on oil. But Edwards, a consummate dealmaker, had a cooler demeanor.

Edwards was born Aug. 7, 1927, to a sharecropper and a midwife in Avoyelles Parish, part of the region settled by 18th century French exiles from Nova Scotia who came to be known as Cajuns. According to his authorized biography, his father’s ancestors were Welsh; his mother’s continental French; but Edwards always considered himself a Cajun.

Raised a Roman Catholic, Edwards preached in the Church of the Nazarene as a teen and he never drank or smoked. Despite his unabashed fondness for high-stakes gambling, dirty jokes and his reputation as a womanizer, he earned a following among Catholics and fundamentalists.

He had four children during a 40-year marriage to his high school sweetheart, the former Elaine Schwartzenburg, before they divorced in 1989. Five years later, at 66, he married 29-year-old Candy Picou in a ceremony at the governor’s mansion. They divorced after he went to prison.

“He was so optimistic all the time. Nothing bothered him except bothering other people,” Trina Edwards said.

According to the statement, she said his dying words were to his 7-year-old son: “Eli told him every night, ‘I love you.’ And he told Eli, ‘I love you, too.’ Those were his last words.”

A lawyer, Edwards began his political career on the City Council in the town of Crowley in 1954 before moving on to the state Legislature, then Congress. He won the governor’s office in 1972 with help from organized labor and Black voters realizing their civil rights-era strength.

He appointed more African Americans to policy-making positions than any previous governor and spearheaded the adoption of a new constitution.

“My dad never saw color and never turned his back on anyone in need,” said his son Stephen Edwards, who worked alongside his father in the Edwards Law Firm, according to the family statement.

Edwards seized on an oil boom in 1974 to defeat energy interests and fill Louisiana’s coffers, tying oil taxes to price, rather than volume. Changing the severance tax from 25 cents a barrel to 12.5% of value made Louisiana the most cash-rich state in the nation at the time while New York City was going bankrupt, said Honeycutt, his official biographer.

Constitutionally barred from a third consecutive term, he left office in 1980 only to return four years later, after easily defeating incumbent David C. Treen, the state’s first Republican governor since Reconstruction and a frequent target of Edwards’ barbs. “It takes him an hour and a half to watch ’60 Minutes’” was typical.

The campaign was briefly suspended by tragedy: Edwards’ youngest brother, attorney Nolan Edwards, was murdered by a disgruntled client.

A grieving Edwards resumed the race and went on to win, then paid off his debts from the $14 million campaign by chartering a $10,000-a-head trip to France for his friends and supporters.

“I’ve wanted all my life to be a king, and now I can be,” he quipped during their stop in Versailles.

Meanwhile, his reputation for impropriety caught up with him. He had seemed impervious to earlier scandals, even when he acknowledged that he and his wife Elaine received $20,000 from South Korean government agent Tongsun Park.

But in 1985, he was indicted on federal racketeering charges involving hospital and nursing home regulations. His fortunes had faded by the time he was acquitted the next year: Bowing out of a 1987 runoff when he faced certain defeat against Democratic Rep. Buddy Roemer, Edwards appeared politically finished.

But Roemer suffered political setbacks during his four years, including voter rejection of a tax overhaul package. His switch to the Republican Party didn’t help.

Edwards entered the 1991 race — which was open to members of all parties — as did former Klansman David Duke, also running as a Republican. Edwards and Duke earned spots in a runoff, which Edwards won in a landslide by stoking fears that an ex-Nazi in the governor’s mansion would bring economic ruin.

Edwards retired in 1996, but wound up, again, under federal indictment. Prosecutors said he took payoffs to influence the awarding of casino licenses. This time, the charges stuck.

Eulogies poured in as word of his death spread.

Louisiana’s current governor, John Bel Edwards, no relation, said: “Edwin was a larger than life figure known for his wit and charm, but he will be equally remembered for being a compassionate leader who cared for the plight of all Louisianans. Our state has lost a giant, and we will miss him dearly.”

Funeral arrangements are pending, according to the family, but there will be a public viewing in the Louisiana State Capitol’s Memorial Hall, just steps away from where Huey Long is buried.