Could infamous brothel become Mississippi’s next big tourist attraction? One man sure hopes so. 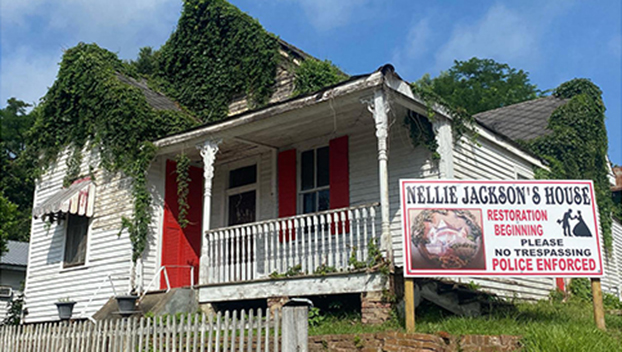 One of the state’s most infamous brothels could soon be one of Mississippi’s next big tourist attractions if a Natchez man’s dreams come to fruition.

Robinson, the house owner, said he purchased the property approximately one year ago because he didn’t want to see Nellie’s, and the significant history and legend behind it, lost to the wear and tear of time and neglect.

For more than 60 years Nellie Jackson ran a bordello known as “Nellie’s Place.” She operated her business in plain sight with little interference from authorities. She even sold t-shirts promoting the business that read “Follow Me To Nellie’s.”

Jackson died tragically in 1990 after an angry customer poured gasoline on the front porch of the house and lit it on fire. Both Jackson and the angry customer died as a result of injuries from the fire.

Robinson said he happened to meet Nellie Jackson in the late 1970s. He worked a total of nearly 40 years for the telephone company in Natchez and was called to her house to make repairs to her phone line, he said.

“She was a very pleasant, professional lady and I was truly distracted by the girls and trying my best to do my job and leave,” he said.

Now retired, Robinson said he wants to preserve parts of Natchez that knew while growing up here.

“If everything leaves and we let everything go away, there is nothing to look forward to when you do move and come back home. Everything has changed.”

Robinson said the house sparks enough interest from the public that it would be possible for public entities like Visit Natchez to host regular tours there. The house grew in popularity from the release of the documentary “Mississippi Madame: The Life of Nellie Jackson” in 2017.

Robinson said his plan is to possibly have the house as a Bed and Breakfast and museum to the house’s original owner Nellie Jackson, who was widely known throughout the City of Natchez for having an illegal business there that no one would dare put a stop to.

A lot of legal work, research and restoration work still needs to be done before it can be open to the public, he said, adding he expects the restoration work to take anywhere from six months to a year before it’s complete.

“Through the years, the house has had many owners but no one has ever sought to restore to its original form,” Robinson said.

The house’s fame unfortunately led to some people collecting souvenirs and destroying parts of it, he said.

“Everything that was inside, someone with a crow bar has removed everything that can be removed — a door, window, brick or whatever they can get out of the house,” he said. “Everyone wanted a piece of it just to say that they had been there.”

Robinson said he placed a sign there to deter crime and also let people know that the house is not lost and that an effort to restore it is taking place.

He sought guidance from Historic Natchez Foundation Executive Director Carter Burns and director emeritus Mimi Miller, who provided him with photographs that depict what the house looked when Nellie’s was there.

“It is a tourist attraction and deserves to be preserved and restored,” Burns said. “Nellie has a lot of notoriety from her business and what happened to her but there is also some little-known Civil Rights history there. … The foundation is excited to see somebody take in interest in the property and start working on it.”

Since purchasing the house, Robinson said he learned some lesser-known details about Nellie Jackson, like how she was rumored to have been an informant to the FBI about the inter-workings of the Ku Klux Klan. She was also involved with getting protestors out of jail and making many contributions to people and charities around town.

“Based on the expected potential of the place, I hope I can have the community behind me on it,” Robinson said. “Some people frown, some people laugh about what it was but I just hope the community will support me in this endeavor and help it move forward.”