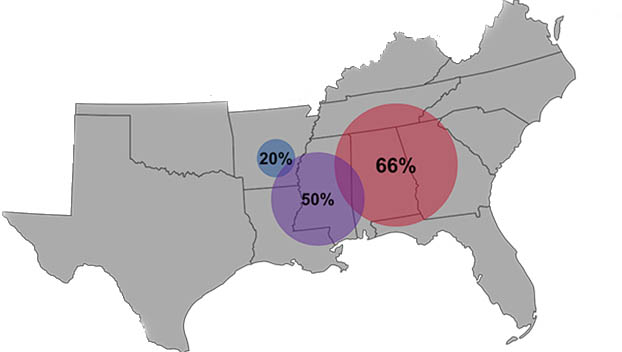 A recent poll showed that 66% of Republicans in the South would support leaving the U.S. and forming a new country.

The poll, released by Bright Line Watch Wednesday, asked a variety of questions to respondents across the U.S. about the state of the country six months after President Joe Biden was sworn into office.

Among the questions about the politics, government and elections was a question about secession. The secession question was also asked in January when Biden started his presidency.

In those states, 66% of Republicans said they would support leaving the U.S.  Those sentiments were shared by 50% of independents and 20% of Democrats.

The polling group also asked the question to other respondents in other regions of the country.

The group constructed five prospective new unions and inserted the relevant states for respondents into the question. For example, a participant from California in our survey was asked about joining a new union along with Washington, Oregon, Hawaii and Alaska.

Below are the regions that were formed in the poll:

The report cautioned that the survey results reflect initial reactions by respondents about an issue that they were unlikely to have considered carefully.

“Secession is a genuinely radical proposition and expressions of support in a survey may map only loosely onto willingness to act toward that end. We include the question because it taps into respondents’ commitments to the American political system at the highest level and with reference to a concrete alternative (regional unions).” the report stated.

Levels of expressed support for secession are arrestingly high, with 37% of respondents overall indicating willingness to secede. Within each region, the dominant partisan group is most supportive of secession. Republicans are most secessionist in the South and Mountain regions whereas it is Democrats on the West Coast and in the Northeast. In the narrowly divided Heartland region, it is partisan independents who find the idea most attractive.

“These patterns are consistent from our January/February survey, but the changes since then are troubling,” the report said. “Our previous survey was fielded just weeks after the January 6 uprising. By this summer, we anticipated, political tempers may have cooled — not necessarily as a result of any great reconciliation but perhaps from sheer exhaustion after the relentless drama of Trump.”

The report said the instead of diminishing, the support for secession rose in the last six months “in every region and among nearly every partisan group.”

“The jump is most dramatic where support was already highest (and has the greatest historical precedent) — among Republicans in the South, where secession support leapt from 50% in January/February to 66% in June,” the report stated.

Support among Republicans in the Mountain region increased as well, by 7 points, from 36% to 43%. Among Democrats in the West, a near-majority of 47% (up 6 points) supports a schism, as do 39% (up 5 points) in Northeast.

Support jumped 9 points among independents in the Heartland as well, reaching 43%. Even subordinate partisan groups appear to find secession more appealing now than they did last winter, though only increases for Democrats in the South, Heartland, and Mountain regions are statistically discernible at the 0.05 significance level. The broad and increasing willingness of respondents to embrace these alternatives is a cause for concern.

‘Nothing but God’: Mississippi community rallies behind family that…